Meow! I was surprised by my good friend a while ago. This surprise was to go see Lady Gaga live and I did plan to do a blog post and a video about it at the time but I got a bit annoyed and such with it and deleted it so I thought I would tell you about it... Im also going to talk a bit about why I love Lady Gaga as well but I hope you enjoy the post! (This is going to be a lifestyle post... It will only go into my lifestyle folder if I mention the word of the folder within the post... It's weird like that at the minute...) So as I said, within November, my friend Abby surprised me at the last minute by taking me to see lady gaga. It was such a spur of the moment thing but it was to celebrate us being friends for such a long while and to have fun as we both love Gaga.

We met up after college and went on the train to Leeds which included us catching up on things. We arrived in Leeds, grabbed something to eat and grabbed the second train which took us to Sheffield. We talked more and wondered what it was going to be like.

After a long task of finding the tram to venue, we finally arrived! We walked in once our tickets had been scanned and tried to weave in and out of the masses of 'little monsters'. We slowly entered he standing area after skipping the merchandise and food stands as the queues were that long.

The stage was made out of lucite glass so we tried walking under it to see what happened and you could see through it. We waited after the slightly eccentric support acts did their thing and heard an announcement stating that it was time for artRAVE... We waited patiently and then different coloured lights flickered through the venue whilst upbeat dance music echoed.

Gaga eventually came on the stage and performed her first song 'Artpop' the title track of her third album (fourth if you include the LP which was The Fame Monster...) This song on its own contained bubbles, big blue balls which I tried to hit at one point as I had no clue what they were for) and a glittery dress with wings attached. 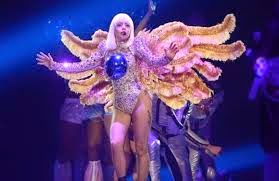 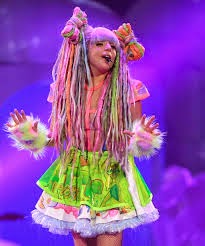 I'm now going to talk about why I love gaga as if I talked about the gig in detail then I would be here forever.

She's just an amazing artist. It took her quite a while to get where she is today and didn't get to the top via a talent show or anything like that. She changes so much with every album this you remember certain outfits such as the meat dress or the seashell bikini with a certain album which makes her memorable. She may be different and crazy but that makes her an amazing artist and I love her music as she includes a lot of influences within each album...

I hope that you've enjoyed me rambling about Lady Gaga! Don't forget to comment with what your favourite Lady Gaga song is and  I shall see you tomorrow for another MIM post!