Welcome to a brand new blog post! I finally got my hands on the Ferrero Rocher bars after pretty much hunting them down whenever I was at a supermarket so I thought that today I would talk to you all about them. 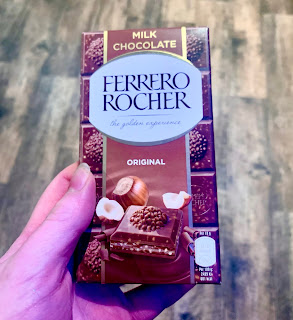 During my childhood, two confectionery based products were the height of excellence to me. Lindt Lindors and Ferrero Rochers. Seeing those adverts where all of the chocolates were encased in gold packaging that would glimmer and shine against the lines in the studio. All of the spherical chocolates lined in a pyramid ready to be unwrapped. The sound of someone biting into one in the advert which would make your mouth water instantly. These are some of the factors that made me instantly connect Ferrero Rochers with excellence... Now that same celebrated chocolate treat has been turned into a chocolate bar.

The two bars that I could find were the Original Milk Chocolate and the Hazelnut Dark 55% Chocolate. I did hear that there is a White Chocolate bar that is on supermarket shelves and that Ferrero hope to release some more flavours but I have only heard this through the grapevine so take this with a good pinch of salt.

Both go these bars share a similar texture, so I will mainly focus the texture on one bar as the difference between these bars lies more in the taste rather than the texture, or the textural contrast of different components against each other (eg. smooth cream against a crunchy nut praline and so on).

The texture of this bar was quite interesting. I was expecting it to be exactly like the original Ferrero Rocher truffles but that isn't the case with these bars. When I placed a piece of these practically perfect bars into my mouth, the first thing that hit my tongue was the oh so smooth chocolate. Whether this be milk or dark chocolate, it didn't matter, they were both smooth against my tongue. Once this texture hit my tongue the nubbly nutty filling hit the roof of my mouth which made for an amazing textural contrast against the smooth chocolate. The nuts were of a fine texture which meant that the filling didn't feel like chunky clusters going into my mouth.

The Milk Chocolate Original Bar tasted amazing. The first component that hit me was the chocolate. Instead of texturally, this time the chocolate hit my tongue with the sweetness and creaminess that milk chocolate gives when anyone places a square of it into their mouths. This milk chocolate was instantly contrasted with the toasty and slightly savoury note that came from the toasted Hazelnut filling that was next to hit my palette like a wave hitting a surfer without a care in the world doing their thing in the waters. These two flavour notes combined later on in the tasting experience of this bar to create a salty sweet concoction that is to die for.

The Dark bar was surprisingly just as delicious! My qualms normally with dark chocolate when its mixed with another flavour (in this aspect, its nuts but I've tried bars with caramel, fruit etc) is that the Dark Chocolate overwhelms the other components in the bar which then makes the other component (eg fruit) pointless. The Dark Chocolate is at a 55% Cocoa rate which means that it isn't too strong and thus allows the other flavours in this bar to dance on the tongue without having their thunder stolen by the chocolate. I really enjoyed the Dark as the slightly more rounded and fruity chocolate gave a completely different taste experience compared to the Milk. As someone who isn't the biggest Dark Chocolate fan, I would definitely recommend this bar to others. 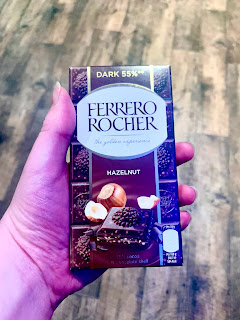 Would I buy this again? Yes, but I have a few stipulations. First, I wouldn't hunt them down in several stores for several weeks and I wouldn’t buy them often due to the pricing of the bars. I would get them when I wanted to treat myself and if I knew that I could purchase one in my local area. I also would like a few more flavours. I think that a fruit flavour would be nice especially against the warming flavours of the nuts that are in the bar and I would love to see some experimentation with the nuts themselves. Macadamia, Coconut, Almond. The list could be endless. The bars are priced ai £2 for 90g.

Have you tried out the Ferrero Rocher Bars? Let me know down below.

Posted by jamiesowden at November 14, 2021 No comments: