How's everything going today? Good? Bad? Let me know down below!

Welcome to a brand new blog post! The Body Shop have recently brought out a Shea Hair Mask, as a part of, their Spring Collection. As I love to try any and every beauty product, I thought that I would talk to you about my experiences with it.

One of the lovely members of staff at my local store gave me a sample pot of this to try. With all beauty products except for bath products I tried this over a two week period to ensure I could review it properly. 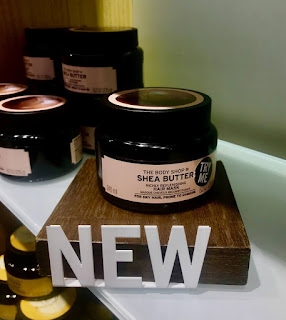 The formula of this product is a new one for me. It's quite creamy within the pot, and it still keeps that creaminess to an extent, but when it's in the hair, it turns into more of an oil. I did feel like I needed a tad bit more once I had applied it. I'm not sure if that was a cream to oil thing, or, just my hair being drier than the Sahara.

Massage a good scoopful of the product into damp, clean hair. Leave for 10 minutes (at least, you can also use it overnight if your hair needs it). Rinse thoroughly.

It lathered and creamed well. The product made my hair feel soft and nourished. Sadly though, as my hair is slightly irritated and quite dry, I noticed that after a while my haie just felt a bit coarser than normal? I did try this product a fair few times and 3/4 of the time, this happened. The other quarter showed that it was a very creamy product. I just think sadly, that my hair didn't agree with this mask.

Would I Buy It Again?:

If it came in a mini tub for me to travel with, then maybe. The pot is massive for the price, but I think you need to make sure that it works for your hair first. I'd love for it to be in a mini format so I could take it with me on the road, but, otherwise probably not, just from my hair not getting on that well with it.

I hope that you come back soon for another blog post.

This is not a sponsored post. A staff memeber at The Body Shop Briggate gave me this to try. I have created this review out of my own free will. All views, opinions and ramblings are my own.
Posted by jamiesowden at March 23, 2019 No comments:

It's Getting Stormy Up In Here | VOLATILITY Storm Chasing

How's everything going? Let me know down below!

Storm chasing, is well, chasing storms that can consist of any weather condition, from hail to extreme tornadoes, and, everything in between. Many storm chasers tend to create montages and compilations of videos to show off their love of storm chasing. This is mainly due to storm chasing being a dangerous hobby to enjoy and participate within. VOLATILITY Storm Chasing are here to completely shake storm chasing and the viewing of this sport up. They are here to change it for the better, via, a beautifully filmed and edited series of fun, adventures, and challenges on all terrain trip. There will be, thunderstorms, an abundance of hail, and much more. Will they get to capture the all mighty storm that they are chasing? You'll have to watch the series to find out.

In an interview with Ben Pickering (one of the amazing people that participated in creating VOLATILITY Storm Chasing) he estimates that he has spent an average of 20 hours, at least, each week editing since late August 2018, working out at a frankly unbelievable 560 hours on just the first episode! An incredible achievement considering he has to juggle with his day-job of studying for a PhD, editing whenever he can in the evenings and weekends.

We ran two Garmin Virb 360˚ cameras during the chases, which are renowned for their quality in the early 360˚ market. They also record a host of metadata such as barometric pressure, compass, gyroscope, heart rate, GPS and more which have enabled some of the unique shots and graphics seen in the series. Additional footage comes from DSLR time lapses and post-chasing interviews. Studio recording started last summer (and is still ongoing for the later episodes), and is captured using a Panasonic GH4 in a DIY studio location. Perhaps the best feature of shooting in 360˚ is the ability to edit the angle later (particularly for in-car conversations) with an infinite number of possibilities. Ben states that “this is one of the features which gives VOLATILITY Storm Chasing such a unique and engaging style”.

Even if you have never viewed Storm Chasing footage before, but love adventure based videos, even if its just stuff like vlogs/seeing what people get up to, then I'd suggest watching VOLATILITY. You can catch it on YouTube. If you want a little preview of the series, then, watch the trailer at the top of this post.

I hope that you've enjoyed this blog post. Come back soon for a in-depth review of their first episode!

This is not a sponsored post. I am just promoting a YouTube series for a friend. All views and opinions at all time are my own. Please do check out the series.
Posted by jamiesowden at March 23, 2019 No comments: