Okay so I know that this isn't my normal sort of topic to write about and I'm a bit scared about doing this but screw it! Stuff like this needs to be talked about a lot more. If you're not a big fan of the same sex on same sex stuff or you don't have a penis then go and check out Zusterchap. They're a blog that talk about periods, sex and all things nice! 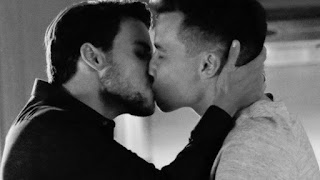 (I got this from Google as I couldn't find anything that was suitable on the site that bloggers use for photos. The link for this also just came up with a search on Tumblr when I found this on Google Images so sadly I can't link this back as I don't know which account it came from.)

There is always that person who asks the awkward questions when they found out or you reveal your sexuality. I thought that I would answer a few questions that I normally get asked about sex.

Okay, so the myth is that it hurts the first time and honesrly it might for some people. Might being the word. If you don't use enough lube and ask if it's comfortable for the other person/if they don't ask and things then it might hurt. If you do things in the correct and right way then theres a good chance that it won't hurt.

First of all, a what or a what? Don't make a train an euphemism for a penis... Trains get you places, penises don't do that in any form whatsoever. Second of all, I'm guessing you're wanting to know if I'm a top or a bottom when it comes to sex and honestly I don't think that's any of your business unless you're going to be doing the sex thing... The funny thing is that some people are versatile which means they're up for being both... Just stop asking people it, it would save a lot of people the energy of not wanting to murder you when you ask personal stuff like that.

Well its a magical app on your phone where we all talk about unicorns and hope to make cakes with rainbows and smiles and talk about things to do with gay icons... Okay, I'm joking. Grindr is an app that you can get from the App Store and Google Play (I think...), its a gay 'dating' website that uses your location to find the nearest people who use the app. It is most commonly known as the hook up app which is quite true but guess what you don't have to use it to hook up as no means no within the world but you can use it for things such as finding friends and just talking to guys when you want to talk about things that some of your friends might not understand...

5: Oh, you must find every person of the same sex attractive?

Sorry if I have used the wrong word and prefer a different term such as queer etc I don't mean to offend. I am just talking from my perspective and I hope that you guys don't mind that. Don't forget to comment with your opinions of this and if you think that we need to talk and write more things about sex because I definitely think that we do! I hope that you have enjoyed this little question based post and I hope to see you for another post sometime soon!