I was invited to try out Black Swan's new menu within Leeds. I went to try out their last menu update which if you want to read about that then I shall link that here. Oh, if you haven't noticed by now, I like to get very detailed when it comes to menu tastings just so I can make sure you're salivating whilst reading this post so it might be best to grab a drink as this is a long post. 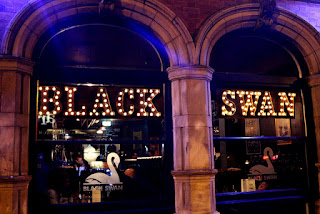 Me, Michelle and Luke went into Leeds a tiny bit earlier so we decided to go to Caffe Nero as they had a free hot drink via O2 Priority Moments. We then decided to go to Lush because myself and Michelle love Lush quite a bit. We checked out the new Mothers Day range and looked at the Gorilla Perfumes such as Dear John and Death and Decay. We then went to Schuh as Luke wanted some shoes but it then ended up leading to myself buying some Disney Mickey Mouse Vans as they were on sale from £53 to £19 which I think is an absolute bargain! Thanks to Michelle for persuading me to buy the shoes!

We made our way to Black Swan as it is only a stone throw away from Schuh which is in Briggate. We got to the restaurant within one swift move which is actually an achievement as I normally have no clue of where I am going when it comes to events 9 times out of 10. We entered the restaurant and was told that we could choose either three beers to drink throughout the night, wine or a soft drink if you weren't big on drinking. I was going to choose a soft drink but I threw caution to the rain and decided to try three different beers. I can't remember the three beers rhat I tried as I'm a bit bad with names of stuff the first time around (I remember one having some relevance to rebels?) but they were all lovely! We tried to sip our drinks but we were then told to move upstairs for the rest of the event as the downstairs area for meant to be for customers that were dining out on the night. 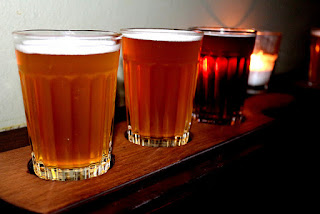 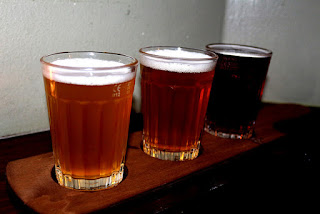 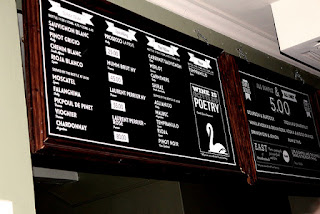 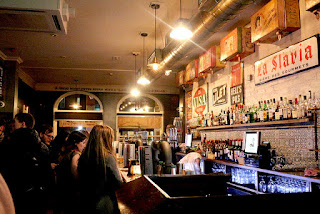 We made our way upstairs which was quite a difficult task due to glasses and whatnot so a helpful member of staff took them off our hands whilst we made our way up the stairs. We sat down on a elongated table which was in the style of a bench. We chatted for a few minutes then two lovely ladies came over and sat with us. We then chatted a bit more until our starters came. I'm sorry that I can't remember the names of the lovely ladies that sat with us but if you're reading this then hi!

Please remember that all of the pictures within this post are not mine but are Michelle's and if you click on her name throughout this post then it will lead you to her Flickr where you can see more of the perfect pictures that she has shot.

The first dish that came out to us was the Duck OXO Cube with a Celeriac Veloute and a Celeriac and Apple Salad. I was very intrigued about the OXO Cube concept as it meant that the Duck would have a smoky yet concerntrated flavour due to the addition of the OXO. I loved the taste and texture of the Duck and I would happily buy it if I was dining there in my spare time! 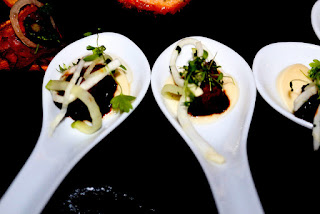 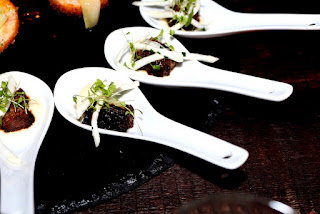 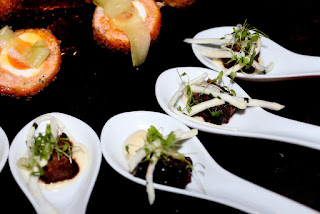 The next thing that we ate was Venison Carpaccio with Pickled Shallots, Sherry Vinaigrette and Nasturtium. I think the Nasturtium is in the form of a crisp. I felt like the crisp thing took over the flavour of the Venison as it dominated the palate as soon as you took a bite of it. I feel like it might be best to try a bit of the Venison on it's own and then try it with the other things after tasting a bit of the Venison on its own. Carpaccio is the thinnest cut you can get on any type of meat which means that it melts in the mouth as soon as you bite on it which it did.

The next thing that we tasted was the Salmon and Crab Scotch Egg with Pickled Cucumber and a Parsley Emulsion. This one was a different one for me as it was a unique twist on the classic Scotch Egg. I kind of liked it though. I got more of the Salmon than I did the Crab though and I think that if you had wedges of lemon to spritz over as soon as you cut into the Scotch Egg then that would make it absolutely sublime! If you're not a fan of Fish or Seafood then you're probably not going to like this one!

I then tried Leek and Pearl Barley Risotto with Crispy Leeks. I really like Risotto but I barely cook or have it as I know how much effort it takes to make a risotto so if I know that I can make a chef or whoever not take the time to make a risotto then I probably won't. This risotto was amazing. The Pearl Barley gave it some texture and so did the Crispy Leeks which turned this dish into extravagant comfort food. (That's the best type of food that you can get!) It's a great dish for vegetarians and non meat eaters alike! 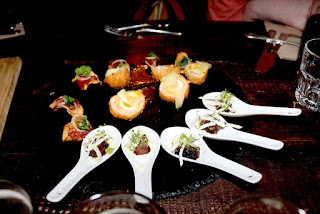 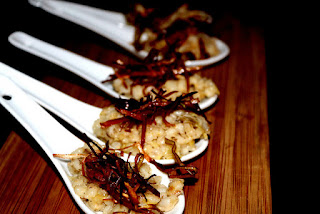 Now onto the mains!

We first had the Pan Fried Seabass with Butternut Squash Puree, Roasted Squash, Baby Leeks and Mushroom filled Pasta. I feel like I should eat more fish than I do as it's good for the brain and all that jazz. I loved the Squash element of the dish as it gave a sweet element to the dish as the fish gave a meaty sort of element to the dish. I love Mushroom filled pasta so I loved that part of the dish. I always love pasta which leads me onto the next little dish.

The other main course that we enjoyed was Pork Belly with Rib and Black Pudding Croquette, Braised Cheeks, Carrot Puree, Roast Chatennay Carrots and Mustard Jus. I didn't get much of the mustard jus but I loved the braised cheeks which I wasn't expecting to love and I felt the same about the Rib and Black Pudding Croquette as I'm not a big fan of Black Pudding. The Pork Belly was sublime. I did think though that the Mushroom Pasta went well with this dish compared to the Seabass just because it contrasted more with the meat compared to the fish.

We also had some Roasted Seasonal Roots. They were sweet and tender and I loved them. I feel like they would go best with something hearty!

We rarely took photos of the mains because we were too busy chatting... Sorry! 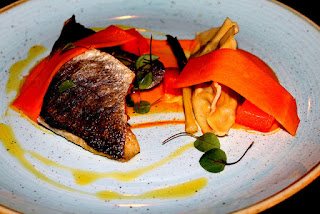 Okay so first up on the desserts section is Spiced Rum Poached Pineapple with Raspberry and Sorrel Sorbet. I loved this dessert mainly because I love Pineapple. The Spiced Rum gave it a sort of Caribbean vibe but there's also a bit of Chilli in there for good measure which creates such contrast between the Chilli and the sweet Pineapple which literally makes your mouth water. 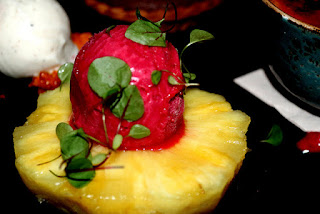 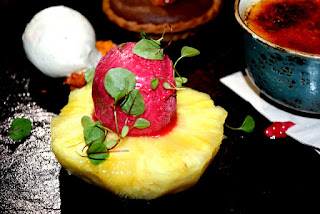 The next dish from the menu is Dark Chocolate Tart with honeycomb and bourbon-vanilla ice cream. Oh my god, I love chocolate tarts and this one was amazing. It was rich but not too rich as it was sliced up. It's one of those tarts that tastes amazing but you probably wouldn't want to try and eat all in one go. The ice cream was amazing. I like bourbon and I like vanilla ice cream so fusing them two together was an amazing idea! 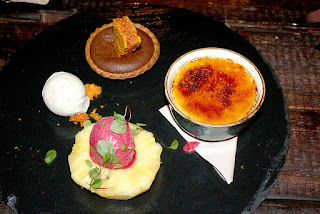 The last dessert item that we were served was Stewed Rhubarb and Ginger Creme Brulee. (Sorry for not putting the correct accents on top of the letters.) I love Creme Brulee's so I already could tell that this was going to be a great dessert. I was a bit apprehensive about the Rhubarb but it was amazing! The ginger gave a gentle heat to the dish which I loved. If there was any more Ginger in the Creme Brulee then it might have been on the verge of hatred for me as I feel like it would have taken centre stage so I'm glad they had the right amount in this dish. The crack on the Creme Brulee was exquisite and it's the best thing about a Creme Brulee in my opinion! 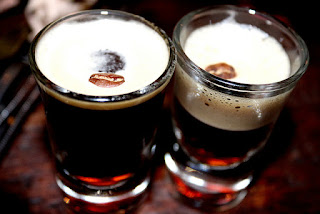 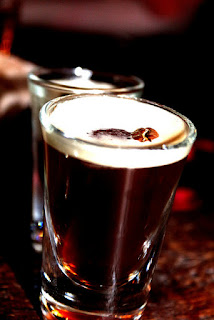 We then chatted for a bit more until an Espresso Martini shot came around for us which was quite amazing. I'm not the biggest fan of Espresso but it was divine as it was only in a shot form and had a little coffee bean on top of it. The perfect way to end a great event. We then had the chance to talk to the head chef which I thought was a great addition to the night.

So there you go! A detailed post all about the new Winter To Spring Menu at Black Swan Leeds. Have you tried any of the dishes above? If so then tell me what you thought in the comments below! Don't forget to go check out the new menu here!  Don't forget to check out Michelle's photos! I hope that this post didn't make you too hungry! I would also like to thank the staff at Black Swan for putting on an amazing night and for the guys over at I Like Press for inviting me to the event!