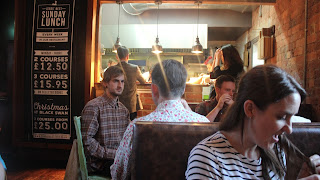 So around a week ago I went into Leeds because  I was invited to try out the new Autumn menu at Black Swan and I thought I would tell you all about it.

I met Luke in Bradford town centre on the Thursday afternoon as I finished college at four and it was easier for him to meet me instead of going home to come back into town to catch the train. We got on the train to Leeds and talked about things that happened throughout the day. Now as I always end up getting lost when it comes to events within Leeds, I decided to go on an adventure to find it and I slowly realised that it was in front of my eyes and I had past the street that Black Swan was on every time I have been in Leeds.

We entered the restaurant and like normal had no clue what we were meant to do so we asked the bar staff on the ground floor who told us that the event was happening on the first floor so we made our way up the grand stairs to the floor where the event was happening which was filled with booths and chairs. We made our way over to a table/a beautiful booth where some bloggers were sitting down.

We talked to them for a while and then the bartender came over. I got a drink for Luke and then he wandered off so I couldn't get one sadly. This cocktail was an Amaretto Sour from what I remember which meant this cocktail contained Disaronno Amaretto, Lemon, Sugar and Egg White. I tried a tiny bit and I could instantly tell the amaretto which combined with the sugar and lemon made it a bit more vibrant without making you think that you could only handle one of these. The egg white was more of a texture thing for me I think. It tasted more smooth which may have helped the sugar dissolve into the drink quicker with the acidity of the lemon but it was a great drink which I would drink quite a bit when the weathers warm which is rare within Leeds. 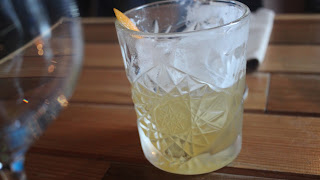 We had two canapes which were served in little mouth sized spoons so it was more of a pop in the mouth moment. The first one was Onion Three Ways from what I remember but I may be completely wrong. This one had Onion Bhaji, Onion Puree and Red Wine Onions. I love Onions so this was an amazing canape for me. The crispy bhaji against the softness of the red wine onions against the smooth puree made it an incredible dish, I had quite a few of these from what I remember. The second canape was a homemade Duck Pastrami with an Orange and Walnut Salad. Now, I know what you're thinking. Classic Duck a la Orange in a different way therefore it will still taste disgusting... You're wrong! This canape was amazing. The succulent duck against the crunchy nuts and smooth dressing made an delicious combination. I'm not a big fan of Walnuts so that was the only problem but they were provided for crunch which I liked... The orange was there but it wasn't overpowering therefore it let the Duck do it's own thing. I also had a few of these from what I remember. There was also a third canape which was Goats Cheese and Beetroot which I didn't try because I'm sometimes a bit particular with Cheeses and other reasons which I may touch on later on in the post. 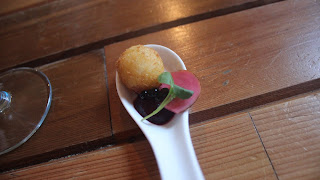 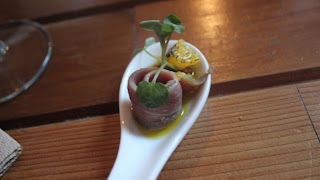 Another round of drinks came around the table and this time it was Mojito. I went to grab Luke one but the lovely member of staff had already put one down on the table for him so I ended up having two which made up for not grabbing a cocktail the first time round. I love mojitos and they always remind me of Summer no matter what. This one had a 3 year old Rum, Sugar, Lime and Mint. It was perfect. Sometimes restaurants make different versions of mojitos which I also love but I absolutely adore drinking the original yet perfect Mojito. I ended up stuffing a sprig of mint in my pocket because I wanted to keep smelling the mint on the train home... 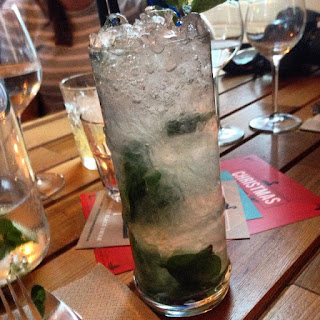 We were then served a started of Braised Pig Cheeks with a Pork Pie puree, Sweet & Sour Apple and a Crackling Salad. I am sure The Black Swan are amazing when they think of the textures of every dish they produce. The succulent cheeks as they were poached went really well with the puree and salad. We all know Apples and Pork go amazing together so I don't really need to comment about that part. The salad created a crunch element and lifted the dish as a whole. The cheeks kind of tasted like Beef somehow and it caused the mind to be confused for a while but it was an excellent dish with a great presentation. I am still confused how the cheeks tasted like Beef though. 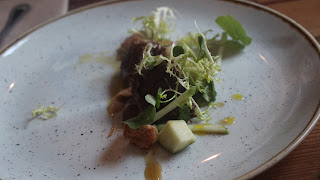 The members of staff then came around with some Black Swan Burgers. These consisted of a Beef and Bone Marrow patty, Baby Gem Lettuce, Pickled Cabbage, Heirloom Tomato, Wholegrain Mustard Mayo and then topped with a Beer and Sesame Bun and a Beer Battered Gherkin/'Pickle'. We asked for plates which were saved for later on so the members of staff brought out the platter board with some on so any mess went onto the board. The burger patty was so succulent which is probably from the Bone Marrow but contrasted with the crispiness of the lettuce and the juice from the tomato made it amazing. The mayo made the whole thing amazing but didn't overwhelm you via the mustard. The pickled cabbage added a bit of sourness to cut through the meat. It was all amazing but the main star of the burger was the Beer Batterfed Gherkin for me. It just added some crunch and a bit of tang. I could have eaten all of them that were on the board in front of me... 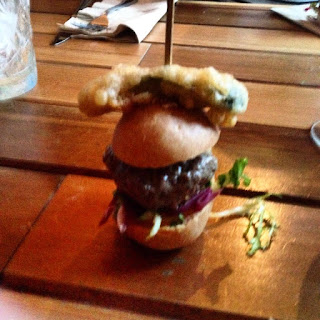 As there was a vegetarian on our table, she couldn't have much up to this point except the canapes. The next dish that was presented to us was Pumpkin Tortelloni with a Pumpkin Puree, Roasted Butternut Squash and a few other things. Now like the stereotypical student, I inhale pasta so I felt like I was going to love this which was true, Pumpkin is a main Italian filling for pasta as it gives a sweet yet savoury taste to the pasta. The Tortelloni was amazing and the squash that went along with it was tender. This is literally Autumn in a dish and I would if I could have this most days as lunch. The only problem for some is if you're not keen on Butternut Squash then this might not be the dish for you.

The meat came back onto the table in the form of Confit Pork Belly with Chorizo, BBQ Baby Corn and some other things. I love anything that is Confit because it just falls off the bone and is so tender. It is slightly fattening but worth it from time to time. The texture of this against the crisp tender baby corn was amazing. I love Chorizo so that was an added bonus for me but I loved this. If you don't like Pork then this may not be for you but every component was amazing on its own and then when blended together it all just created a decadent yet divine dish. 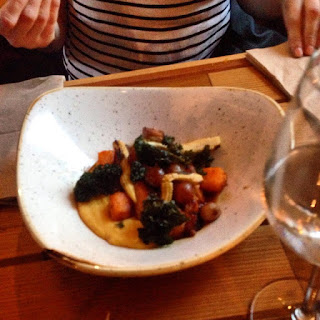 Some Steamed Mussels came around but I was the only one who ate them on the table and I didn't want to look fat in front of other people so I passed on them. If I was on my own then I probably would grab them off the member of staff and end up looking like a monster from the White Wine sauce but I may come back and try them on my own sometime...

All the savoury food had now been consumed so it was time for the sweet treats! We had an Ale Cheesecake which was topped with a Salted Caramel Peanut Brittle and Nutella Powder. First of all before I say anything else, where the hell do you get Nutella Powder from because I think i need it in my life right now. The Ale Cheesecake was an homage to Yorkshire I think just from the Ale. The Ale did give a sort of dark flavour to the cheesecake which cut through the Cream Cheese. The Salted Caramel Peanut Brittle gave a salt element to the dish but also gave some texture to it as everything is soft in a cheesecake except the crumbly base so something like a brittle went well with this dish, If you're not a big fan of ale or strong flavours such as dark chocolate then you might not love this dish but it was something different and I think I could eat it every now and again.

The last dish was so Autumnal it could have had brown leaves falling from it. This one was an Apple Crumble Creme Brulee. Now I love Apple Crumble and I love Creme Brulee so mixing the two together is amazing in my eyes. It had a creamy filling with cubes of soft Apple hidden within the white silky layers of the cream but then it also had a slightly buttery granola type crumble topping which made it amazing. I feel like if they had done the creamy layer and added the crumble pieces into the cream somehow like an Eton Mess then done a layer of burnt sugar on top then it would be amazing. It was an amazing dish but I just didn't get the Creme Brulee element. It was styled like a Creme Brulee but didn't have brulee bit. It was still amazing and so Autumnal. I would have it again but I could see myself having it with a Hot Chocolate maybe or if I was having a cocktail then maybe something with Green Apple Vodka in... 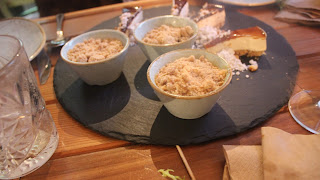 Anyways, I loved trying out the Autumn Menu at The Black Swan. I tried something new in the form of Pork Cheek and I had a wonderful time meeting and talking to new people. I enjoyed it so much to the point that I may return soon. Thank you to all the staff at Black Swan and all the PR staff who put on this event!

If you're a student like me and are always up for a good discount then The Black Swan is for you as they have an offer on where if you book within the next two weeks, you will get 50% off your menu bill... It's seriously worth it!

I hope you have enjoyed this blog post. Have you been to Black Swan before? Have you tried their Autumn menu yet? Let me know in the comments below! I hope to see you next time for another blog post!

Book your reservations and check out the rest of the menu at: