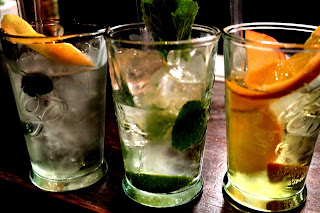 Last week, I brought my friend Michelle and Luke to an event that was in Leeds. I thought I would tell you all about it and mention my friend Michelle a good few times as she takes some amazing photos. If you click on Michelle's name throughout the post then it should send you to her Flickr where you can check out her photos.

The brand's concept is all about bringing the 1920's to the current era (a quote says that its based on 1920 speakeasies) via influencing the drinks on what would be the sophistication of society back then or something along those lines. The brand consists of three different ciders which all have other spirit flavours within the drinks but doesn't contain said spirit. The bottles of the cider are 500ml vintage brown bottles which may be a nod to back then and are priced at £4.95. The brand name is apparently to do with the whole 1920's concept but don't quote me on that.

I met my friend Michelle on the day and we made our way to the train station to catch the train to Leeds. Myself, Michelle and Luke ed and slightly ranted about anything and everything as we normally do when getting on a train to Leeds. We got into Leeds and made our way to Roast + Conch as we had came into Leeds a bit too early. We looked at the new Halloween range and tried the taste of the month which is a Butterscotch truffle with a red oozing centre for Halloween. We exited the store and made our way to Lush as Michelle hadn't smelt the new things. Let's just say we spent a lot of time and Michelle spent a lot of money restocking her Lush collection...

We made our way to Corn Exchange as The Maven's twitter had told me where to go to find them. We still got lost trying to find it which ended up in Michelle wandering to find it. Whilst she did that, we found Kariss and her friend who sadly I can't remember the name of because my memory isn't that great when it comes to new faces. (Sorry!)

We instantly realised that it was straight behind us which then led to us going 'ohhhhh' and making our way up the stairs to the venue space that the event was in. I said my name and got given a leaflet which was essentially a press release telling me about Blind Pig and what to expect throughout the night. There wasn't that many seats/tables for the amount of people that were in the room so we kind of felt quite lost where to sit or what to really do. The lighting was quite dim which may have been to do with the 1920's theme. The music that was on in the background proved this theory but was quite loud which made it near impossible to network or socialise. 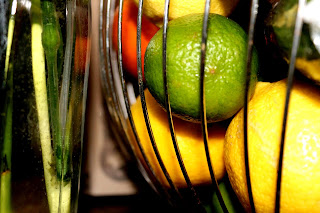 We thought that it would be best to just spend our time at the bar. We read the press release to ensure we knew what the flavours consisted of. I ordered Bourbon & Blueberry, Luke ordered Rum and Poached Pear and Michelle chose the one that was remaining which was Whiskey, Honey and Apple. By the end of the night we had tried all three each. 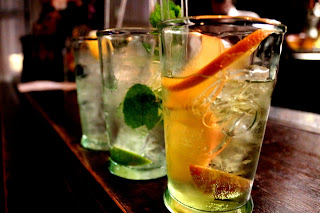 The Bourbon and Blueberry was served in a green glass which was Blind Pig branded but was also served over ice with a handful of blueberries that were dispersed throughout the drink and with a twist of lemon peel/zest on the rim of the glass. The bourbon was distinctive but didn't take centre stage with the drink therefore letting the blueberry do all the talking. I love blueberries so I knew that I would love this one. The sweetness of the blueberries were complimented well with the Bourbon which made a great mixture but Blueberries are naturally quite sweet sometimes so if you don't like your cider on the sweet side and prefer a sharp drink then this one might not the best Blind Pig Cider for you. 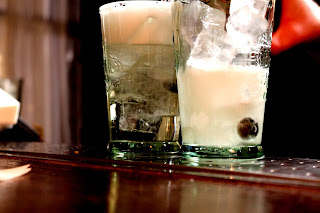 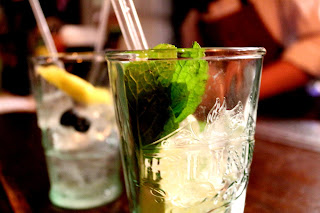 I then had the Whiskey, Honey and Apple. This was served in the same glasses as above. This one was served over ice with wedges of apple and a drizzle of honey. An orange wedge is served on the side of the rim to add to the drink if you feel like it needs a citrus kick to it. I ended up eating/licking the orange wedge because I'm normal like that. I shall provide the picture to that below. The Whiskey takes most of the attention on this one. The honey isn't really a distinctive taste but adds sweetness to the drink which slightly takes the edge off the drink leaving it sharp but not to the point where its too much after two gulps of the drink. The apple adds a slight bit of freshness to the drink but takes a while to be detected when drinking. I think this is one of those every now and again ones for me. 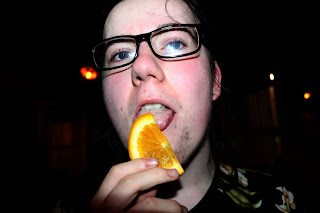 The last one of the three is the Rum and Poached Pear which I enjoyed last. This one was amazing! It was served with the regular ice but had Lime and Mint running all the way through it to echo a modern mojito. I love Mojitos so I instantly loved this. The rum did take most of the attention again but the Pear added that slight tang of sweetness needed. I could see myself enjoying this one a lot with friends as it's probably as lovely without the Mint and Lime running throughout it which steeped some of its flavour into the drink. I literally did save the best till last. 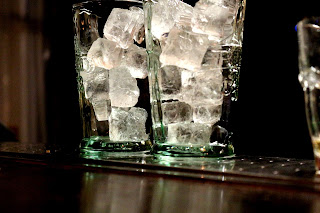 Throughout the night me and Michelle took many pictures and had such a laugh. We talked about everything over the loud music and enjoyed a lot of giggles. I also talked and met The Dress Diaries and even though I only chatted to her for a sec she seemed so lovely! Myself, Luke and Michelle made our way to the train station where we enjoyed a McFlurry and enjoyed the quieter atmosphere and talked about anything and everything until I hugged and said goodbye to Michelle and got on my train home.

I hope that you have enjoyed this blog post. If you've tried any of the ciders then let me know down below. If not then tell me if you would try them or not. I hope that you like the pictures that Michelle took. If you want to see her stuff then click on Michelle's name on any of the paragraphs above this one. If you want to check out any of the people that I have mentioned then click on their names on the paragraphs above this paragraph. Thank you to the PR and Blind Pig who put this event on and I hope to see you next time for another blog post. 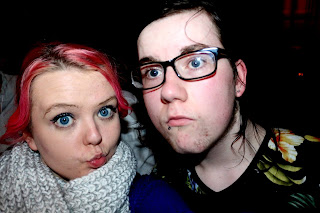 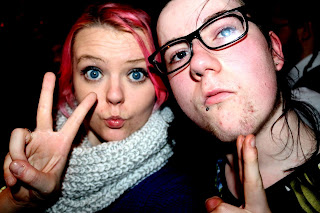