How Do You Overthrow A Dictator? You Cut Off Her Resources | Rant 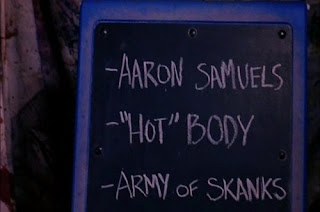 Sorry that I haven't posted for a while. I've had college which has meant essays and all things studious which has tired me out which then meant I ended up napping from being tired and then not writing any posts because well I was napping. Anyhow, I'm back for the minute! This blog post is a rant post but I'm going to try and word this post well which basically means I'll try and not swear as much but lets see how that goes.

So if you're a blogger and check your Twitter on a regular basis like I do then you will know that some drama went down this week. If you're not a blogger then you will have probably heard about what has gone on this week. @LilBlondeSammie who is also a blogger caused a lot of controversy on Twitter when she decided to tweet her 'opinion' on Twitter about the Channel 4 TV show 'My Big Fat Wedding.' She decided to tweet her opinion and then insult others based on their opinion. She also then decided to shut down any persons opinions and shove her own deluded opinion down everyones throats or eyes as Twitter is Social Media not direct conversation.

Her opinion was that plus size is becoming the norm as a TV show is showing plus sized citizens and therefore glamorising obesity and making it the norm within society. She also believed that being plus sized is only caused by eating and basically you can not become plus sized if you exercise and eat 'salads'. She also then went on to talk/frankly trigger eating disorders, generalise people, insult people and not spell any of her points correctly.

I joined in with the 'debate' at something past midnight because I felt like I wanted to make a point to her and I wanted to back Faith up as her point was completely valid, I said something which Faith backed up and then after that it just got out of hand where every tweet became 'yes but that wouldn't happen if they didn't eat so much' 'its their fault' 'eating kills you' sort of tweets to the point where I gave up trying to get across my point.

You shouldn't generalise one point, you shouldn't insult or offend others if you know its happening, You shouldnt do anything that LilBlondeSammie did to get her point across because then you're being a vile person to a community which is full of lovely people.

LilBlondeSammie is a vile vile person and doesn't deserve to even be in the blogging community to be honest. I know you may say you're saying that but you're giving her publicity. That may be true but I am giving her publicity so we can stop what is going on. She has fat shamed, triggered people, insulted people, annoyed people, offended some and a list of others whilst still thinking that her one single point is valid for the whole topic that she was trying to cover. It is not and this is what leads me to my blog title.

How do you actually overthrow someone when they are being absolutely vile? You cut off their resources! That may not be fully accessible to LilBlondeSammie but you can do your best. Block and report her, stand up for your point and lastly take no shit from nobody. If she tries to contact you from any other forms of Social Media block it and report it. I want to show that this dictator wont be one for much longer.

I'm sorry that I've ranted/rambled/not made sense. I hope you've enjoyed this blog post and I hope to see you next time for another blog post. Leave your comments down below. Also a big up to anyone who is plus sized. You're amazing!