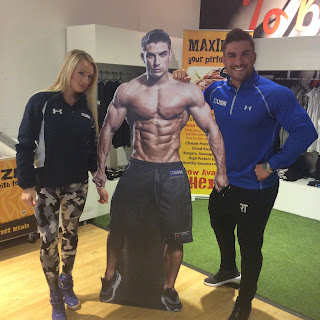 So, as I said in my last post, I haven't really published anything for a while due to many reasons but this hasn't stopped me from going to events. It just means that I have no clue when someone will go up so I could write something a month after it has happened.

A few weeks ago, I was invited by Joe Blogs to an event at the Predator Nutrition store in The Light in Leeds which was to celebrate Ryan Terry and Heather Schofield coming to the store to showcase the store and to sign some posters and to take some pictures. (I tried getting a lot of pictures but I spent the day talking to the other bloggers that came which were Caroline, Lizi and Jenna.)

One of the members of the staff within the store came up to us and asked who we were, we said our names and she disappeared to go get us our goodie bags. The same member of staff came back and then gave us a tour of the store telling us about all of the products that were sold at the store including protein bats, special nut butters, whey powders, protein enhanced ice cream and many other things.

We talked for quite a while about everything from blogging, events and other many many things and then wandered around until we found a cardboard cut out of Ryan which led to a good five minutes or so of swooning over it. We kept talking and wandered about a bit more until Jenna came which led to more talking and swooning.

We then went over to the corner where there was a competition going on where you had to try and hold a 2kg bucket for as long as possible. I didn't have a go but Lizi and Caroline had a go and they did amazing and probably a lot longer than I could probably carry it for. We laughed and then went over to talk to Ryan about his life and how he got to where he is nowadays. He also talked about the fact that he comes from Leeds and talked about the evolution of Leeds over the last few years. 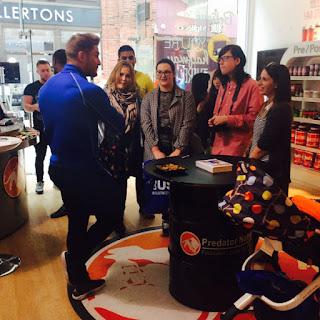 So I hope that you have enjoyed this blog post and I hope to see you next time for another post. If you want to read the post that Predator Nutrition wrote about the event then click here to read it.

The pictures are all provided by the link that is presented above and are not mine.