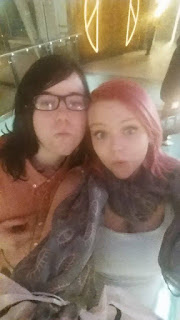 All the photos in this post were taken by my good friend Michelle. She's the female within the picture above. I wanted one of Trinity on the night but due to it being 'that' busy we decided not to. The reason that this post is going up now is due to wanting a picture which Trinity Leeds' Twitter said they would send over and I wanted this post to go up so I could crack on with other ones so yeah. If you want to see any of Michelle's womderful work then I will leave links at the bottom of the post and a link to the Roxy Lanes Leeds post which also has her work/perfect photos in.

So last week, I went to the student lock in within Trinity Leeds and thought I would tell you about it.

I decided to go with my good friend Michelle who went with me to Roxy Lanes Leeds in February. If you want to see that post then I shall put the link to it at the bottom of the page.

We got on the train and decided to catch up on certain things like we normally do when we get on the train to Leeds together. We talked about everything from college to Lush and everything in between. When we got to Leeds Train Station, Michelle decided to go to Starbucks and get a Iced Caramel Macchiato. As I don't have a great relationship with caffeine I decided not to get anything from Starbucks.

We walked up from the train station to Trinity Leeds as we were planning on meeting some people when we got to the queue to get in for the student lock in but we took a slight detour and popped into Hotel Chocolat: Roast + Conch. If you know me at all then you will know that I love Hotel Chocolat as they do dark chocolate so less chance of intolerance and all the flavours are amazing. The store was open only for the students so we walked in and I went to go show Michelle some of the items that I have told her about before which include the Chocolate Pasta, Mojito Truffles and the Carrot Cake Truffles. We were then offered some Chocolate Puddles which are basically chocolate buttons with a gooey chocolate filling and some seriously luscious salted caramel hot chocolate. We were also offered Rum within our hot chocolate but I declined as I felt that it was slightly too early to be drinking Rum. We also registered to win a chocolate hamper that was worth over £50 of chocolate. I had another look around and decided to walk up to meet the other people. 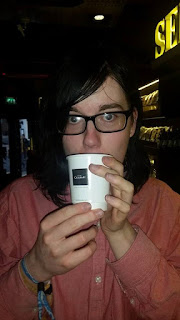 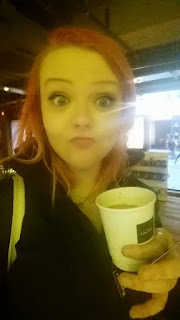 We walked up the hill and cut through Trinity Leeds to get the queue. We found the other people and waited in the queue which took a while. A remix of a Lana Del Rey song was blaring throughout the open space which I loved. After a while, we actually got inside with our student wristbands and made our way throughout the stores.

We ended up waiting on the ground floor which consists of Pulp and other places. We waited for another friend Nicole and then when she arrived we made our way to Pulp. We looked around the store until Michelle found a dress that was on sale that she liked. She decided to buy it whilst I went to see if there was any new band tees. We then decided to get in the long queue and talk for a little longer. We got to the till where someone I knew was on the till so I decided to chat to them for a bit before freeing up the queue and exiting the store.

We then decided to go to Primark. Primark didn't have any offers unlike Pulp which had 20% off but it was open all night which made up for the no offers. We went in and looked at the clothes. We lost some of the other people and tried looking for them. On the way, we looked at some more clothes but then after a long long while, I ended up finding something that Michelle loved and was on reduced therefore she bought that and then Nicole decided to get something. After worrying about the other people, we decided to go to Trinity Kitchen as we thought they might be there for a drink or something.

We then ended up going on a walk to try and find them. When we went on our adventure, we ended up outside which then lead to passing Lush. Michelle asked me if we should go in which then lead to a f*** it moment. We went in and I told Michelle about the new range as she had only seen some of it online. I then ended up acting as her personal Lush expert and told her/showed her all the new stuff which then lead into getting a basket and filling it for her... What are friends for, eh? We then noticed that there was a member of staff in a corner of the store whilst a lovely person was playing the guitar and singing. The member of staff was creating Butterball Bath Ballistics and asked if we wanted to make up with the costs going to charity which came out to £1. (£1 for a bath ballistic is amazing. I'm going to talk about it in more detail via my DOAML series.) We then left the Lush store and made our way up to McDonalds where we found the other people.

We found the people and chatted for a bit when someone had done something which caused the music within McDonalds to stop. The police announced something and then ended up reassuring us that everything was fine... That was a fun moment.

Myself and Michelle decided to go back into Trinity for the search of food and drink. We found Krispy Kreme handing out free products but the queue was massive so we ended up getting some free Fosters Rocks: Spiced Rum which is a Spiced Rum flavoured Lager. We then made our way to Victoria Secrets to have a look which then led us to the Frozen Margaritas that Cielo Blanco were serving. Michelle decided to get a Strawberry one for us to share as it reminded Michelle of past holidays.

I then decided to get two bottles of Coke and headed off to my train. Myself and Michelle hugged goodbye and we went our separate ways.

See What Went Down On The Night Here: http://trinityleeds.com/students