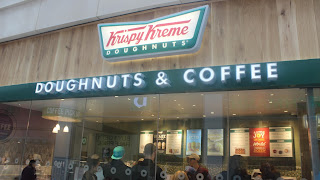 I went into Leeds on Tuesday as I heard about Krispy Kreme finally opening within Leeds. I had known about this for a quite a while mainly due to the billboards and general advertisement around Leeds which includes handing out free packs of glazed doughnuts in packs of dozen (12) which I tried to hunt down several times and then found them when they had ran out... (If you follow me on social media well mainly Twitter then you will have seen my disappointment in not finding Krispy Kreme as I have them every 6-12 months due to the amount of lactose that are in any of the filled doughnuts...) 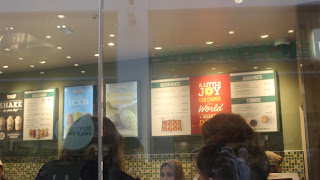 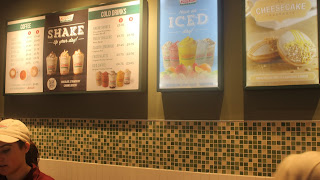 For anyone who has being living under a rock (if I could then I probably would), Krispy Kreme is a doughnut store that originally started in 1937 in North Carolina. They were sold in local grocery stores to start off with and then ended up creating a hole in the wall sort of business... Time passed and the business gradually got bigger via delivery vans, stores and then globally. Even though KK are known for their fresh doughnuts at their Hot Light stores they are also known for other things which include coffee and milkshakes. 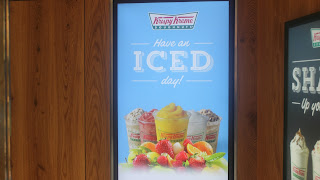 We entered Trinity Leeds and made our way to the store as I knew where it was as it was a 2 minute walk from Lush. We finally made it there! We saw the doughnut store with its glass exterior and waited outside for a few minutes. One of the staff members embraced us to come inside but I wanted to take a few photos first. They weren't great. We walked through the glass doors and saw the screen which promoted their milkshakes. I took another picture and moved along. I finally found it. The centre to every sweet tooths heart. The counters that encased the doughnuts. The centre to the peace in everyone's heart. The one thing that can fill the hole even if its fluffy yet sticky. We ordered a Original Glazed doughnut mainly as I knew it didn't have a creamy filling but still had the fluffy interior which everyone loved. I took my doughnut and walked elegantly out of the welcoming store. The dougnut was fluffy and soft which was delicious as it tasted sweet yet kind of like it was welcoming and the maple glaze (I think) was sweet yet had a husky backnote. It was sticky but not too sticky which was good for a doughnut. I am planning on getting some more in the future. 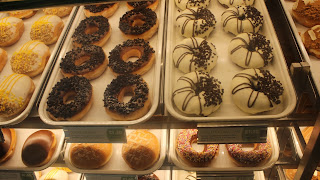 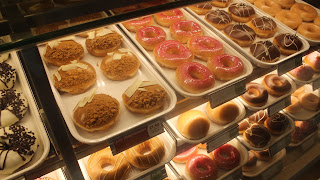 If you have a NUS card then you can receive a 20% discount if you show your card within a store. It is only available in stores. If you sign up to be Friends with Krispy Kreme then you can also receive a free Original Glazed doughnut.

I hope that you have enjoyed this blog post. Have you been to the Trinity Leeds store? What is your favourite Krispy Kreme doughnut? Comment down below. I shall see you next time for another post.