Meow! So today's video is going to probably be a short one which is different!

Le Creuset is known for the above but also do a vast majority of different other things ranging from wine cooling sleeves (yeah they're a thing) to mugs to tagine pots... They all come in a variety of different colours to make the items stand out if served at parties etc. It can give your kitchen a pop of vibrant colour which it might be in need of.

We went into the store and saw all of the vibrant items which include said mugs and other things and kettles. Yes they even do kettles. We noticed that there was a sale on which I looked at as there were a few casserole dishes and stuff and I love me some good cookware. I need to get back into cooking and baking and such properly. (Would you be up for a series if I did, let me know in the comments below!)

The price of the items within store are a bit pricey but they look very durable so the items would last a long time. They also have a guarantee on therefore they would last longer so it would mean that you get more than you pay for which is great when it comes to items that you need as sometimes you could buy flimsy items and then you have to replace them and it ends up being the same price over a few times as the same piece but made with more strong materials.

We noticed that one of the staff members Sam had brought some bread out to taste as Le Creuset also sometimes do events ranging from making crepes to a picnic tasting. This event was all about bread tasting. Sounds weird but bare with. The bread was handmade and cooked by Sam and was also cooked within some of the cookware from Le Creuset and was served in more LC items. It brings more customers into the store and gives the brand a homely reputation as I haven't seen a lot of brands do this sort of thing. 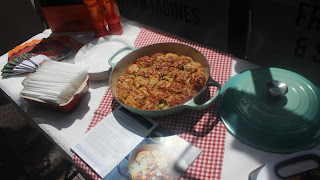 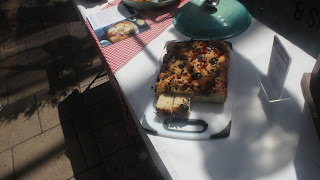 One of the breads were a Cheese & Chive Soda Bread. Soda bread is bread which has no yeast within it therefore it doesn't need kneading but rises from the bicarbonate of soda from what I remember. The bread was dense but was very delicious. The texture was different as it had oats in which provided a sort of nutty/nub sort of texture which I loved as it provided a bit of crunch but it wasn't like granary bread where you get seeds in your teeth etc. The cheese was slightly overpowered by the cut throat chives. I loved it but I feel like it could do with a slight bit more cheese but it would be a great bread for maybe some chutney or something along those lines or great bread for a cheeseboard.

The other bread was a Olive and Rosemary Foccacia. I have a massive love affair with foccacia bread which I left some time ago for many reasons so I was excited to see how Olive & Rosemary Foccacia would taste due to only eating Garlic & Rosemary Foccacia... You couldn't really taste the olives which was good as I'm not a big Olive fan but I love Olive Oil (I think I may have a love affair with Italy/Italian food...) The texture was slightly weird on the inside due to the olives but it wasn't a bad texture. The rosemary came through which I loved and ah I could have eaten a lot more of it... We had a massive chat with Sam about things as she was such a lovely person to talk to!

I hope that you have found this blog post about Le Creuset somewhat interesting and I hope to see you for another blog post! I'll leave the link below if you want to check out LC's stuff and if you're local to Leeds then check out their store within Victoria Quarter in Leeds city centre!