Meow, I went into Leeds and went to Five Guys so I thought I would talk about it. There's also a video that shall be at the bottom of the post. 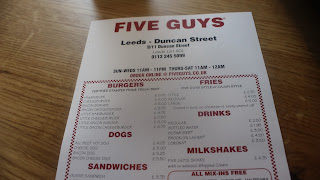 Five Guys is a casual restaurant chain that is well known for their burgers, fries and much more. Their headquarters are within Virginia. The first restaurant was opened in 1986 which was obviously within Virginia. They are known for having a sort of retro diner influenced decor but they are also commonly known for their ethics within food as they only make hand formed burgers cooked to basically perfection and hand cut fresh fries cooked in pure peanut oil. They slowly grew which lead them to all over the world with their newest branch being in Leeds City Centre.

So, I wandered into Leeds and slowly found my way to Five Guys as it's a 3-5 minute walk from the Train Station and is around the same time from Trinity Leeds. I walked past Pieminister and realised that I was there as I could see the bold red from a mile away. It really doesn't take long to get there and you'll know when you're there either from the red exterior or the music that is playing from the interior.

A lovely woman greeted me at the entrance and talked to me a few seconds and handed me a menu leaflet to see what I would like. She explained the ethos a bit to me and talked about the burgers and fries. I think that this was due to it opening only a few days earlier as I went in recently and there was no one at the entrance of the restaurant. 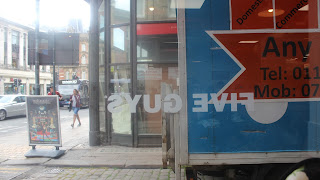 I walked up to the till and requested a regular Coke. She asked if I wanted anything else and I declined as I knew that I would come and try the food some other time. She handed me the cup and my change and then the magic could happen. 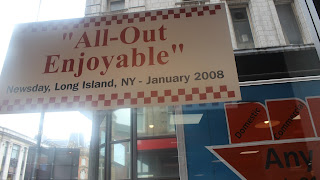 I sat down and vlogged for a second and then I made my way up to the machine. I saw the neon red machine and realised that this was an ultimate dream for a person who drinks like a fish. The first drink that I had was a non caffeine Coke Lime and Coke Orange. As I love Diet Coke with Citrus Zest I thought it would be like that but as the lime was at the top it made the orange a bit more subtle but it was still a nice summery fruity drink. I got non caffeine mainly because there is a non caffeine selection at the beginning of the process and me and caffeine sometimes don't go well together due to anxiety. 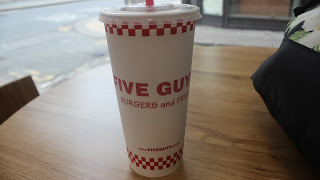 The next one I had was a mixture of Fanta Fruit Punch and caffeine free Raspberry Coke. This was very summery. I think the Fruit Punch is the US equivalent of Fruit Twist as it reminded me of that but it was very fruity. The raspberry added a slight sour hint which worked well with the sweet fruit punch. It seemed like a summery sort of non alcoholic cocktail but maybe change the ratios and add a slight bit of Schweppes Lemonade.

I then went in a few days later with Luke and we enjoyed a few more due to it being refillable and we needed a drink as it was very warm. We discovered that they did Cherry Coke so we had that. Luke is a massive fan of Cherry Coke. He enjoyed it and thought that it was a bit more fruitier than the Cherry Coke he was used to.

I then went up and had a flick through and realised that there was a Sprite section. Luke loves Sprite and I like it on a warm day as it's very refreshing. I found out that there is such a thing as Cherry Sprite. Luke was in heaven. I also enjoyed it. It tasted more of Cherry Blossom than anything as it had a slight floral note to it. Different but good.

The last one that I am going to talk to you about is Caffeine Free Vanilla Coke & Peach Sprite. I know it may sound weird but keep reading. The peach is very fruity but fresh and reminds me of Peach Schnapps. So refreshing but when you top it up with that CF Vanilla Coke it makes it into more of a drinkable form of an ice cream float which makes it slightly sweet but so good... Mmm...

With over 100 different drinks, it is possible to create whatever drink that you like. I hope that you have enjoyed this blog post. Have you been to Five Guys in Leeds City Centre? Have you tried out the Coca Cola Freestyle machine? If so then comment down below and if you have tried the machine then maybe leave your favourite combination? I hope that you enjoy the blog post and I hope to see you next time!