Meow! So every so often, I like to publish posts on my blog on a Thursday where the topic of the post is all about something that happened within the past. This post is going to be all about the time where I went to see La Dispute in Leeds. 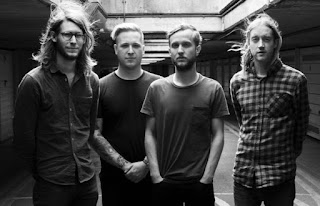 The picture is from Alt Press mainly as I took a couple pictures at the gig but they aren't that great. I hope that you understand and the picture isn't mine.

La Dispute are a foursu piece post-hardcore band who formed in Michigan in 2004. They have been creating music for over ten years. Their lyrics are normally complex which adds to their music. Spoken passages/stories are normally intertwined within the songs which shows on songs such as Andria, Woman (Reading), King Park and others. The band has many influences but they normally have one thing in common which is the fact that they are always challenging themselves. The Black Flag's third album influenced their lyrical style.

I arrived at the venue a few hours before where we waited outside due to the weather being glorious which is a rarity. There was quite a good few people waiting for the gig who decided to sit outside and drink from the venue.

When the time came, I walked into the venue and found a place to stand. I decided on standing at the front during the support acts set as it felt fitting at the time as I wanted to be up and close near the act so I could see how they perform due to being a band I had never heard of... Two Inch Astronaut were good as a band but they could have just tweaked some of the sound to ensure that it was crystal clear and to ensure no static happened.

I then moved due to finding friends. We chatted casually whilst the crew setted up and ensured that everything was working correctly The music was perfect. It slightly constructed the atmosphere which resulted in a fun gig. The music fit the genre of post-hardcore. The music within the gig had elements of spoken poetry in which slightly gave the vibe of a more fun and powerful poetry slam and you could tell that everyone felt engaged within the gig via different tempo based songs. I would give this gig a 9/10 mainly for the opening act but the gig was amazing yet memorable.