Are We Lucid Living During The Whole Of Our Lives? | Seafoal 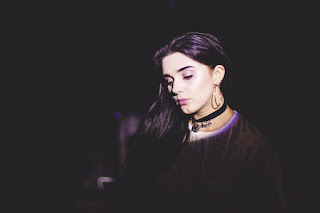 So lately, I have been listening to an amazing artist called Seafoal and I thought I would tell you guys about her just in case you're not listening to her as this post may slightly persuade you to listen to her.

Seafoal who's actual name is Siana Sweeney (lovely name, right?) is an artist who sings mainly ambient folkish music if you were to put it into a genre. Her influences when writing music include Bon Iver, Johnny Cash, Radical Face and many others. Seafoal. Her music is the sort of music that you could just listen to and feel better instantly from. I listen to it most of the time when I'm doing a blog post as it's so calming and soothing.

Seafoal started writing songs when she was 10 and starting playing the guitat at 11 which is pretty impressive in my opinion. Seafoal also self taught herself to fingerpick when she was 17 which is also bloody impressive. She finds this technique a lot easier than strumming which makes a lot of sense because everyone is not the same when it comes to learning a particular thing. If you can even play the guitar then in my eyes thats pretty impressive but that's just me.

Seafoal may be most known for her hits via YouTube as her cover of Drown by Bring Me The Horizon went slightly viral as it has over a million views to this day. The channel also boasts an amazing acoustic cover of Dance Dance by Fall Out Boy which has over 80,000 views. The channel also has a Linkin Park cover which I love and also a few videos showing us what actually happens when artists go on tour. She uploaded her latest tour diary yesterday which I shall link at the end of this post as you all should go and watch it.

Seafoal released her first EP in 2013 which was titled Komodo which may still be somewhere within the internet world. In 2014, she came back with a clean slate and released an EP called Lucid Living ( which was released via Negative Reaction Records.) This EP contains 4 amazing songs. Fading which has been released onto Seafoal's YouTube channel, Read It And Weep. This song reminisces about her past but also compares with her current life and how much she loves. This song is also on her channel within a tour diary, Talulah and Soulsick.  RIAW has a very upbeat tune compared to Fading which has a more relaxing tune. All songs are amazing individually especially Talulah and Soulsick which I'm not going to talk much about as I want you to find out what they're like!  Hopefully more songs and EP's will come out within the future as her music is amazing!

Seafoal went on her own tour this year making her a fully accomplished artist in my eyes. She travelled up and down the country and made a tour diary of it which I've mentioned above. The tour consisted of 8 dates which varied from Manchester to London. She also came back this month to do some dates which also included Ghostfest which had two dates. One at Leeds Student Union and one in Bristol which consisted of many artists but also ensured her that she could show off her true talent and show the audience her music.

Seafoal is an amazing artist and I hope that you listen to her. She's everywhere! Follow her on Twitter or find her on other social media outlets such as Facebook. Listen to her music on Spotify or buy her EP from the Negative Reaction Records website.

I hope that you have enjoyed this blog post! Have you listened to Seafoal before this blog post? If so then comment down below with what you think as I would love to know! If you haven't then I urge you! I may be starting a new series tomorrow on my blog so look out for that especially if you love Lush products!