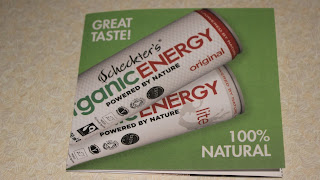 When I was at Summer In The City, I was emailed and asked if I would like to review some energy drinks. Now if you've read any of my blog posts before then you may know that myself and caffeine don't get along most of the time but I thought it might be different due to it being organic so I said yes.

The energy drink was created in 2010 by Toby Scheckter who is a former racing driver and the son of the formula legend Scheckter. He also spent years working on his familys well known Organic and also Biodynamic farm which slowly led to him develop his ideas which also led to him creating the worlds first organic, vegetarian and fairtrade certified energy drink which is definitely something to be proud of. It was launched originally in the UK but is now in many countries including USA, Russia and many other countries. It is available to purchase from their site which I shall link at the end or available from Holland & Barrett

I used the cans a couple of days after I came back from Summer In The City as I literally ended up having an interview for something and then spending two days in Leeds back to back for things so I knew that I would need them. Scheckters sent me two cans, a leaflet and a bag.

I tried the original one first and it had a quite berry heavy aroma. The cans contain Sicilian Lemon, Pomegranate and Elderberry so I think that the mixture of the two with the acidic tang of the lemon juice which helps preserve the drink creates a sort of berry like taste. The sweetness of raw cane sugar which is added may also contribute to this. It made me feel a little bit more perked up but not to the point where I felt I was going to be in overdrive which would cause an attack. I'm not sure if it was because the drink was organic or because it had fresh ingredients but I could handle this a lot more than when I used to drink the odd energy drink which would instantly trigger an attack. I was also given a Lite can which contains the same fruit but has agave nectar within it therefore it makes it slightly healthy for you. 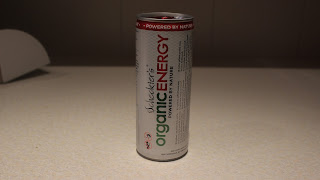 The can is brightly coloured which catches your eye which helps you desire it especially within shops but its something new as most of the energy drink cans that I have passed within shops have had some sort of colour to them where you have to squint slightly at the writing to find out what is exactly in the product whereas this energy drink lets you see what you're drinking due to the simple yet modern blankness of the can.

I would give this an 8.5/10 due to not being a great fan of energy drinks but the fact that it's organic and technically healthy for you. The flavour of the drink could be improved slightly or another flavour could be brought out where it is mainly more citrus. The cans design and colour are different and vibrant but its sold at a prime location which is specialist health shops. I would drink this every now and again but it wouldn't become my ultimate drink like water is to a fish.

I hope that you have enjoyed this blog post. Would you try Scheckter's OrganicEnergy? Do you not drink energy drinks? Are you a stereotypical student who lives off energy drinks? Let me know in the comments below.