Meow, welcome to another blog post. I was invited by the guys at The Liquorist to come and try out their new menu and restaurant which is in Leeds near all the banks and buildings near Trinity Leeds. I hope that you check out the menu and enjoy the blog post. 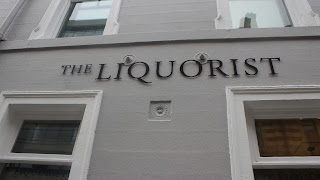 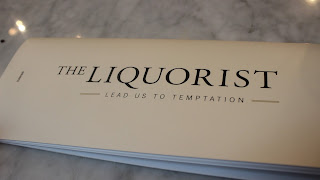 I met up with my friend Abby  and we headed to The Liquorist from the train station as we had decided to meet at the train station. We walked up and for once we actually knew where we were going which doesn't happen often as if the place isnt in the main hub of around Trinity Leeds then it normally takes me a while to get to it.

We had decided to go as we don't see each other often due to both of us having busy yet unsocial lives so we catch up every 3 or so months and just tell each other what has been going on and we thought that The Liquorist would be a great place to catch up with the added bonus of being invited to come try out some delicious food.

We arrived at the pristine building and waited outside for a minute for various reasons which resulted in a friendly waitress coming outside and giving us menus to take away with us. We then went in and said that we had a reservation which made me very grand as I don't make reservations to restaurants very often which was answered with 'Oh... You're the bloggers!"

We were guided to a cosy leather booth at the corner of the restaurant which was perfect for people watching if you just want to watch the world go by but is also great for a large groups. The waitress came over and asked if we had looked at the cocktail menu which we had not done due to being a blogger which was code for taking too many photos. 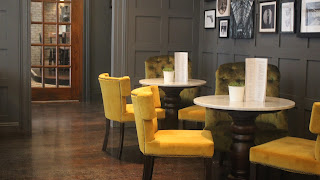 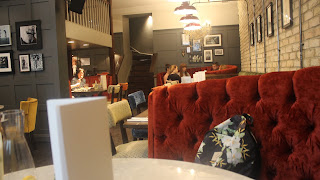 We finally had a look through the cocktail menu as The Liquorist is well known for their bar and their cocktail selection. We perused the menu for a few minutes and decided after eliminating certain cocktails eg Passion Fruit Mojito and Peanut Butter And Jelly Martini which Abby loved the idea of as she loves anything peanut butter like.

Abby decided on a Pina Colada which consisted of Malibu coconut rum, pineapple juice, coconut syrup and cream. She loved the taste of cocont within the drink as she loves Pina Colada's but felt like it could do with a little bit more pineapple in the form of maybe a garnish or something. This costs £8.15 but is also £5 within the happy hours which is after 4 from what I remember.


I decided on a Rocktail which sounds very punk which is one of the reasons why I ordered this. This cocktail contained Absolut Vodka, Red Bull, fresh lime juice, strawberry puree, passion fruit puree. I normally have a vodka and redbull/monster when I'm ever drinking which I shouldn't do as alcohol, caffeine and anxiety doesn't really mix well but ah well... The strawberry and passion fruit purees added a good amount of sweetness and fruitiness in the drink but I personally felt like it could do with a little bit more Passion Fruit as I love Passion Fruit but each to their own. This comes under the happy hour offer or is normally £8.15.

We were then able to gander at the food menu and also take a few more photos. We finally decided on what we wanted and ordered it. Whilst we were waiting, we chatted about anything and everything including a few blog post ideas, current things going on and other things. We sipped our drinks a bit as we had a jug of lemon infused water to clear/refresh the palate when needed.

The starter came which was sliders. There was three sliders which each contained something different. One of them contained blue cheese, one of them contained pulled pork and the other one contained barbecue sauce on top of the meat patty within the slider. We split each slider in half and shared them. The meat inside each slider was tender yet slightly spiced from black peppercorns which gave the meat a slight lift within flavour. The meat was moist and tender. The blue cheese added a slight hint of flavour but didn't give off a strong flavour which I liked as I couldn't tell that I was eating lactose or blue cheese. The buns on each slider were soft yet slightly crisp which is needed within a slider to contrast with the softness of the meat. The pulled pork was tender which gave a slightly different meaty taste to the slider compared with the patty. The barbecue sauce in the last slider made it extra moist and tender and added a kick to the whole slider. 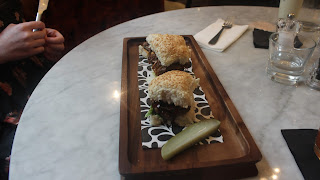 Our main courses arrived soon after we had demolished our starters. Abby had ordered beer battered fish. This consisted of homemade beer battered fish with tartare sauce and peas. I had ordered the 20oz Beef Rib which consists of slow cooked rib finished on a char grill with a spicy BBQ sauce with crispy floured onions. We also had ordered some fries and twice baked sour cream and cheese potato with bacon pieces. I can't say much for Abby's fish but she seemed to love it but my beef rib was amazing. The meat literally fell off the bone as soon as you placed your fork onto the skin which made the meat moist and tender which I love as I can't stand it when meat is cooked for too long and its dry. It was coated in a BBQ sauce which made the meat sticky and flavoursome. The sauce on the side was if the meat needed anointing which was used for the fries and potato which we shared. The fries were crispy and fluffy on the inside and the potato was fluffy yet rich which meant that it was made for sharing, The bacon added a lovely smoky flavour to the potato. 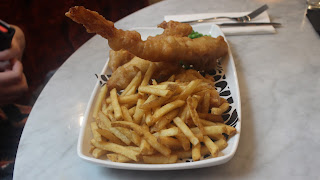 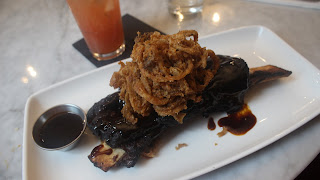 We finally ate and chatted and then was asked if we wanted dessert... You can never pass on dessert! We ordered a chocolate chip cookie dough to share and within a good few minutes it had arrived! It was more than what we were expecting. You could smell baked chocolate goods which always tempts me to eat food but the top was crispy yet soft and gooey which I loved and the scoop of ice cream slowly melted so you had the combination of hot and cold which made it so delicious. There was a garnish of mint which I had to explain to Abby was for aesthetic reasons but it was so good! 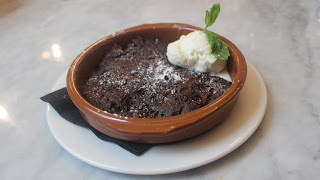 I would give The Liquorist a 9.8. We went on a quiet Tuesday afternoon which gave it some bias as I know it would be completely different to a Saturday night. I love the restaurant as there's a bar bit and a restaurant section so if you just want drinks then you can just have drinks or if you want food then you can have food. I loved the atmosphere and the staff as they were amazing. I just think the deadness of a Tuesday afternoon and the tweaks on the cocktails would bump it up to a 10/10. I loved how it was near Trinity but wasn't so it was near everything but had it's own unique location.

You should come to The Liquorist if you love good food and good cocktails and want somewhere to catch up with friends or to have a girly/Sex & The City influenced sort of lunch as they do some amazing salads and a Cosmopolitan cocktail. If you're in Leeds then you should come and try some of the great things from The Liquorist which is on Greek Street which isn't that far from Trinity Leeds.

I hope that you have enjoyed this blog post! Don't forget to check out The Liquorist's website and comment down below if you've ever been to The Liquorist and what you thought of it. I hope to see you next time for another blog post.

DISCLAIMER: I got the food free in exchange for this blog post but all the opinions are my own. I would like to thank The Liquorist for inviting me to do this.
Posted by jamiesowden at June 17, 2015