Meow, so this blog post is all about Emma Blackery and why I think that she is the saviour of YouTube... If you don't know who she is then don't fret as I will explain within this post. I hope that you enjoy this post and if you want to check out Emma and her stuff then I shall leave her links at the bottom of this post. 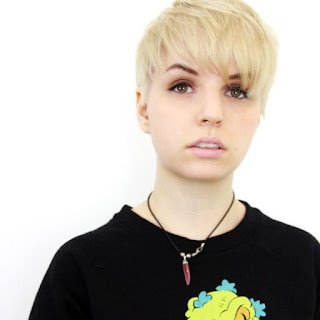 So, Emma Blackery is a YouTuber who is mostly known for her out there videos including ones about cooking for singles where she creates off the cuff comical cooking tutorials, she is also known for her videos regarding sex and other videos where she takes on the roles of different characters. Emma also has a second channel which focuses more on beauty. The channel contains videos such as Lush hauls, comparisons between high end and high street beauty products. Emma is also a singer who has had 2 EP's out so far, She is mostly known for The Promise, Perfect and Go The Distance which were a storm when they were released onto Emma's YouTube channel. She sometimes does acoustic versions of her songs on her YouTube channel.

I have met Emma several times and I can say that from the bottom of my heart she is such a lovely person! The first time I met her, I think she rushed and slightly swore at us as there was a taxi waiting for me and my friends but we were waiting for Emma so we could say hi... It was pretty funny yet lovely as she hoped to make sure we got back to our hotel safely. I met her several times afterwards including buying her boyfriend Luke something and not her as I only had so much money on me and I was having an allergic reaction at the same time and many other times including telling her to wear a seashell bikini so she could be like Lady Gaga... I know it all sounds weird but it isn't if you were there at the time! You should definitely check her YouTube out if you already haven't!

Recently, Emma has been tweeting about how she thinks that smaller YouTubers who aren't known as much as Emma should get more credit for their creativity that they put into their videos as Emma believes that they are the future. I think she is the saviour of YouTube as not a lot of YouTubers do this and I believe that if we do give more appreciation to smaller YouTubers then the community of YouTube will be better off as a whole. As I am a very small YouTuber as well as a blogger, I can agree as most viewers base their viewing time on well known YouTubers but then the smaller creators are struggling to get their stuff out there. What do you think? Comment down below!

I hope that you have enjoyed this little post! As said above, comment down below what you think! Don't forget to check out Emma's YouTube and I hope to see you next time for another post!