Meow, so as you may have seen, I went to Bubbleology in Trinity Leeds as they have just opened up their new store there and I have never had bubble tea before so I thought that I would review Bubbleology and tell you what I think.

Within the haul, I went to Bubbleology as I had seen on Twitter that it had just opened so I decided to go. Bubbleology is a bubble tea company that originates from London. The whole concept of Bubbleology is to combine science and tea together which sounds bizarre but works as the employees wear lab coats and it seems that making bubble tea seems like a chemical experiment due to all the pots, colours, textures etc.

The store within Trinity Leeds is a small and quaint kiosk that is reminiscent of a food hall but its when you go up to it the magic happens. The store has a dark yet matte background with lettering and boards describing all of the different products around them yet when you go up to them, the store becomes slightly lab like. You can choose what you want and with the added bonus of the staff in lab coats it makes the drink you have just ordered feel like an absolutely abstract concoction. 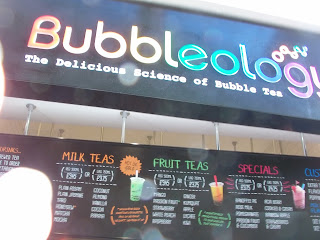 The drinks range from milk bubble teas such as Assam all the way to crazy mixed up buhble teas such as Rainbow Ripple and Cookies and Cream. I have tried them twice now. The first time round I ordered a Mango drink with tapioca in which makes it bubble tea. The drink was refreshing yet sweet. You could tell that it was mango. The texture was weird as it was a first time thing but I felt like by the end of the drink I had got used to the texture. The second time around I had ordered a Cookies and Cream with mango popping boba and tapioca. The taste of the drink reminded me of oreos but intensified whereas the mango popping boba created a zing for the drink as I thought that half way through it would get quite sickly/sweet for some so it was great to find a burst of mango every now and again. The texture of the tapioca wasn't that bad as it wasn't my first time and I had gotten used to it.

I would give bubbleology a 9.5/10 mainly due to the texture and the fact that I have only tried it twice due to the price and other variable. The drinks are amazing but are pricey so I wouldn't have them 24/7. The staff are amazing even when it's busy and the whole scientific concept is amazing. I think that they are going to do amazing in Leeds but I could see a lot of teenagers coming for the fact that it's bubble tea so Saturday may not be the best day to go try it...

I hope that you have enjoyed this blog post and if you go try Bubbleology then comment down below. I hope that you are having a great day and I hope to see you next time for another blog post.