As It Is Are Coming To Leeds!

Meow, so today's post is going to be a sort of weird one. The post is going to be about a band that are close to my heart. As It Is. They have a lot going for them at the minute which I will talk about below. They are doing a lot of things and they need to be mentioned and acknowledged a lot more so that is going to be the point of the blog post! I hope you like the post and don't forget to check them out. They are going on tour in Leeds very soon. I will put the links at the bottom of the post.

So, As It Is are a Transatlantic Pop Punk band from Brighton. The band consists of 5 members. Patrick Foley, Andy Westfield, Ben Bissington and Alistair Testo. They formed within 2012 and slowly became bigger and bigger thanks to certain events such as their first UK tour which was promoted by the band doing a cover of Sum 41's 'Fat Lip.' They then supported Roam on their tour and got more bigger. After this, they went to America to create their debut album whilst along the way signed up with Fearless Records and that brings us up today where they have just released their single with Fearless. 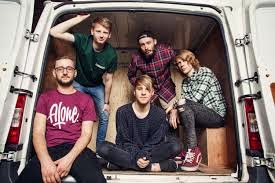 You may know the lead singer from YouTube. Patty Walters has collected fame and quite a bit of audience from his vast amount of subscribers via YouTube. He did this by uploading weekly Pop Punk covers of well known songs including Disney songs and well known songs that were in the chart at the moment therefore he basically recreated a well known song into a alternative song in a different genre than before. He also created a song with Luke Cutforth (another well known YouTuber) which mocked 5 Seconds Of Summer's well known song 'She Looks So Perfect.'

As I said before, the band have just released a new song called Dial Tones under Fearless Records which will be on their upcoming album 'Never Happy Ever After.' The track is all about being away from everyone that you love when you have things to do eg work which is explainable as they were away from their family and friends when in America writing their new album. The album will be out soon and the song is on iTunes so don't forget to download it from here.
https://itunes.apple.com/gb/album/dial-tones/id956854004?i...ign.

Don't forget to check out their YouTube channel https://www.youtube.com/user/asitisofficial/ for some rad music. If you go to the tour then I hope you have an amazing time. I hope you have a great week and I hope to see you next time!