Meow, so I know that I haven't posted in a while... I have a few blog posts planned but they can't go up until the videos for them go up so you will have to wait for them... I went into Lush last week and I thought that I would do a little review thing of their new collections... (The Mothers Day stuff may not be available as it is Mothers Day today and you may not be able to get them tomorrow but I'm not sure so check with caution.)

On Monday, me and my brother Luke went into Leeds for a bloggers event (thats for another blog post) and on our adventure we went to Lush. We sensed the smell of Lush from a mile away within Trinity Leeds... Y'know the detectable scent of all the Lush products mixed together... Some love it, some hate it.

We were greeted by the lovely Holly who I had known from previous trips to the Lush Leeds store. I asked her if I was alright to take pictures... I don't like taking pictures or clips in places sometimes unless I know that I'm okay to as it just becomes an awkward mess... We were then asked if we had seen the new ranges before... I said that I had only seen them vaguely... We were then shown to the new ranges...

We were quickly shown Fluffy Egg... Now some people love it and some people hate it and I kinda hate it... Fluffy Egg smells of candy floss or Snow Fairy as some may know it as... I can only cope with the Snow Fairy scent in small doses so I give anything that someone gets me if its Snow Fairy scented to my friend Michelle who loves Snow Fairy... If you're like Michelle then it is a great Easter product for you! It is priced at £2.95.


The next bath product that I was shown was the Hoppity Poppity. Now, it is a little cute bath ballistic but it speaks louder than it actually is. It is new to Lush which is great as it shows that Lush are still creative with their products. This little bunny is packed with lime oil, violet leaf absolute and lavender absolute which give it a slightly floral yet citrus scent... It slightly reminded me of grass in the spring when its surrounded by growing flowers... When Holly dropped it into the infamous silver Lush bowl, it fizzed up for about 30 seconds and then started crackling. Lush put vegan popping c andy into a few of their products but this was different. It literally sounded like a fire... Yes, it was that loud and went on for a good 10-15 minutes... I feel that this would be great for a kid to enjoy/lure them into the bath... It's priced at £2.50


The next thing that we were shown was Bunch Of Carrots... We weren't showned these in water but we were able to smell them... The Bunch Of Carrots are a long time favourite but for any readers that haven't heard of them then I shall explain! Bunch Of Carrots are a bubble bar. An Easter Version of the Magic Wand or Drummers Drummin' if you must. You can either run all three under the water at the same time or you can take one and just put it under running water. You essentially use the grassy stalk bir to swirl them under the water to create a bubbly bath. The carrots contain buchu oil, lemon and grapefruit oils which give it a citrus yet sweet scent. It's one of those scents that you have to go in store to understand mainly because of the buchu oil... They are priced at £5.95 but you get a lot of baths out of them so it is worth it!
(NO CARROTS WERE HARMED IN THE PROCESS OF MAKING THE BARS!)


The next thing that she showed us was a little bit different...Holly showed us her favourite Lush cocktail at the minute. She even showed me how to properly do one... She used a Big Blue bath ballistic which is filled with local seaweed. sea salt, lemon oil and lavender oil then she used a full Ultraviolet which is a Mothers Day limited edition bubble bar which includes Violet Leaf Absolute and other things... Yes, it would probably be pricey for one bath but the colours and scents of the bowl were amazing (pronounced AHMAYZING just to emphasise the amazingness of it...)

Whilst this was bubbling away... Well from when we came in really... We saw a Golden Egg in water... If you know me at all even if its just from reading my blog then you will realise that I have a high love for the toffee honey scent that Lush create... This is that very scent in a bath bomb... The egg is a bath bomb/melt hybrid and personally I love it! The exterior is golden covered whilst the inside is white and creamy. (*place innuendo here*.) The outside is a bath melt I think with the cocoa butter and then the inside explodes and fizzes around. It's j ust so good and it beats any chocolate egg any day! Priced at £3.75 which means you can have a luxurious bath at a moderate price!

The next bath bomb that was demonstrated before our very eyes was the Rose Bombshell! Now this bath ballistic does look very ordinary on the outside but when it is dropped into water, it froths away quite a bit and then rose petals explode out of the product. A great gift for a Mother from the Mothers Day collection! It does contain quite a bit of Rose Absolute so if your Mother or whoever you buy it for doesn't like Rose then you might not want to get it for them! The product also contains soy milk which will make your skin very soft! It's such a pretty bath bomb though! Priced at £3.50.

We then wandered and took a few pictures and then got a demonstration of the Immaculate Eggception. This bath ballistic is different as it is two bath bombs in one. It is kind of like Love Locket but the scent and design are different. You can get three baths out of it via cracking the shell in half (just tap the seams on a hard surface..) Inside the colourful egg, there is either a bunny or a chick... Lush do a pink and yellow version with either one of the bunny/chicks inside. The scent is citrus influenced but vanilla... The vanilla intensifies if you use the little one inside... Priced at £6.95 which may be expensive but it is worth it! 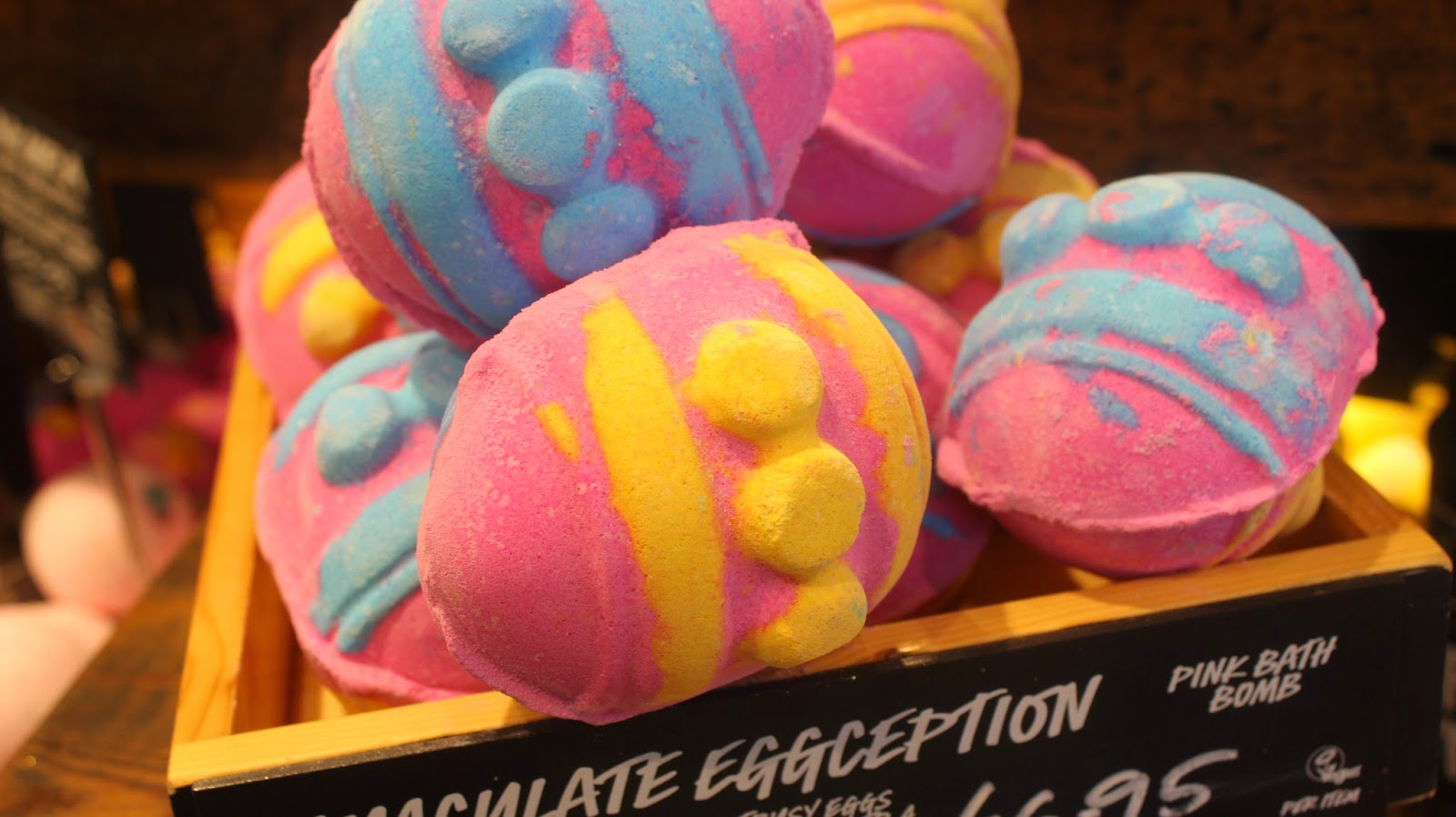 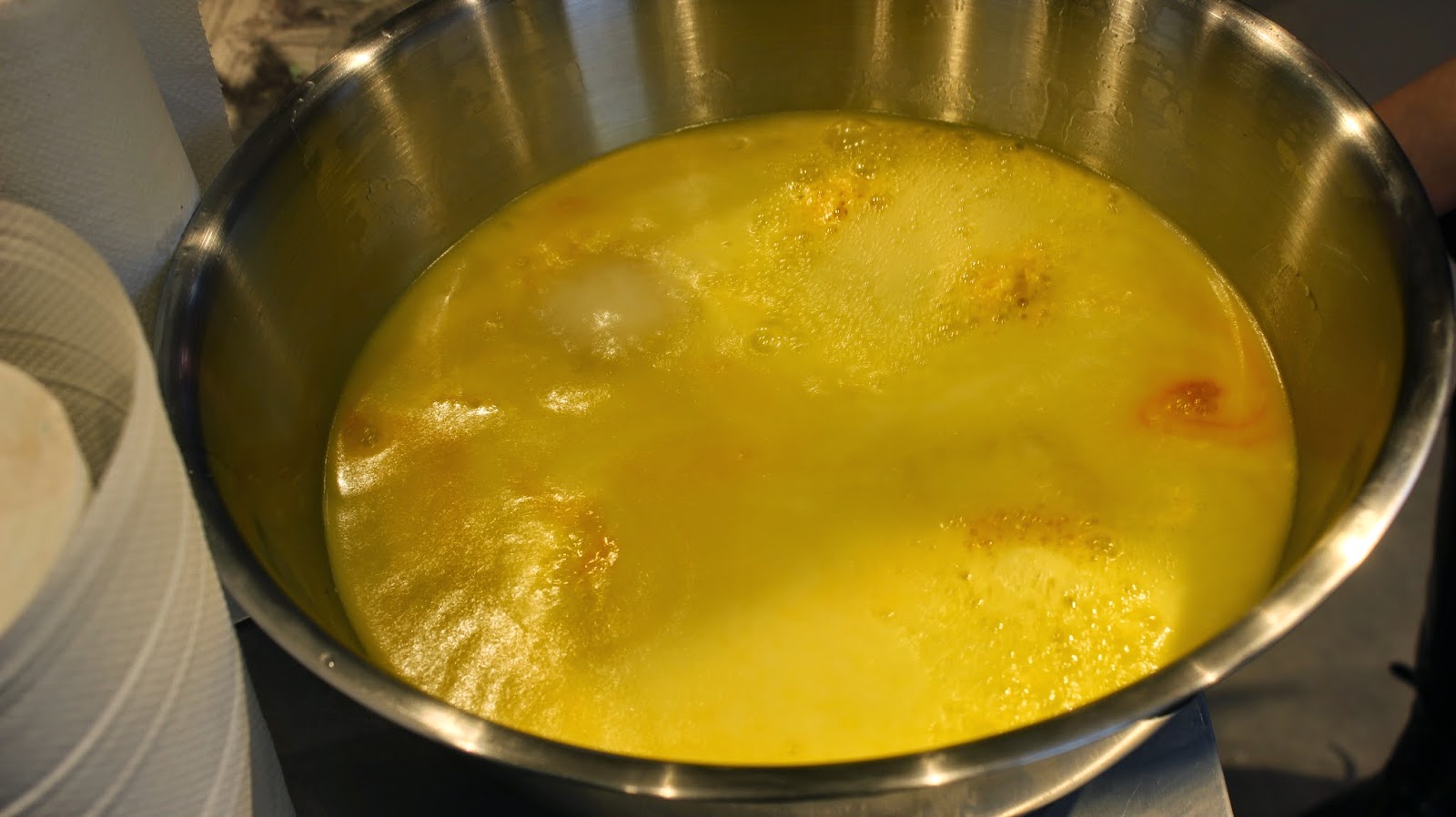 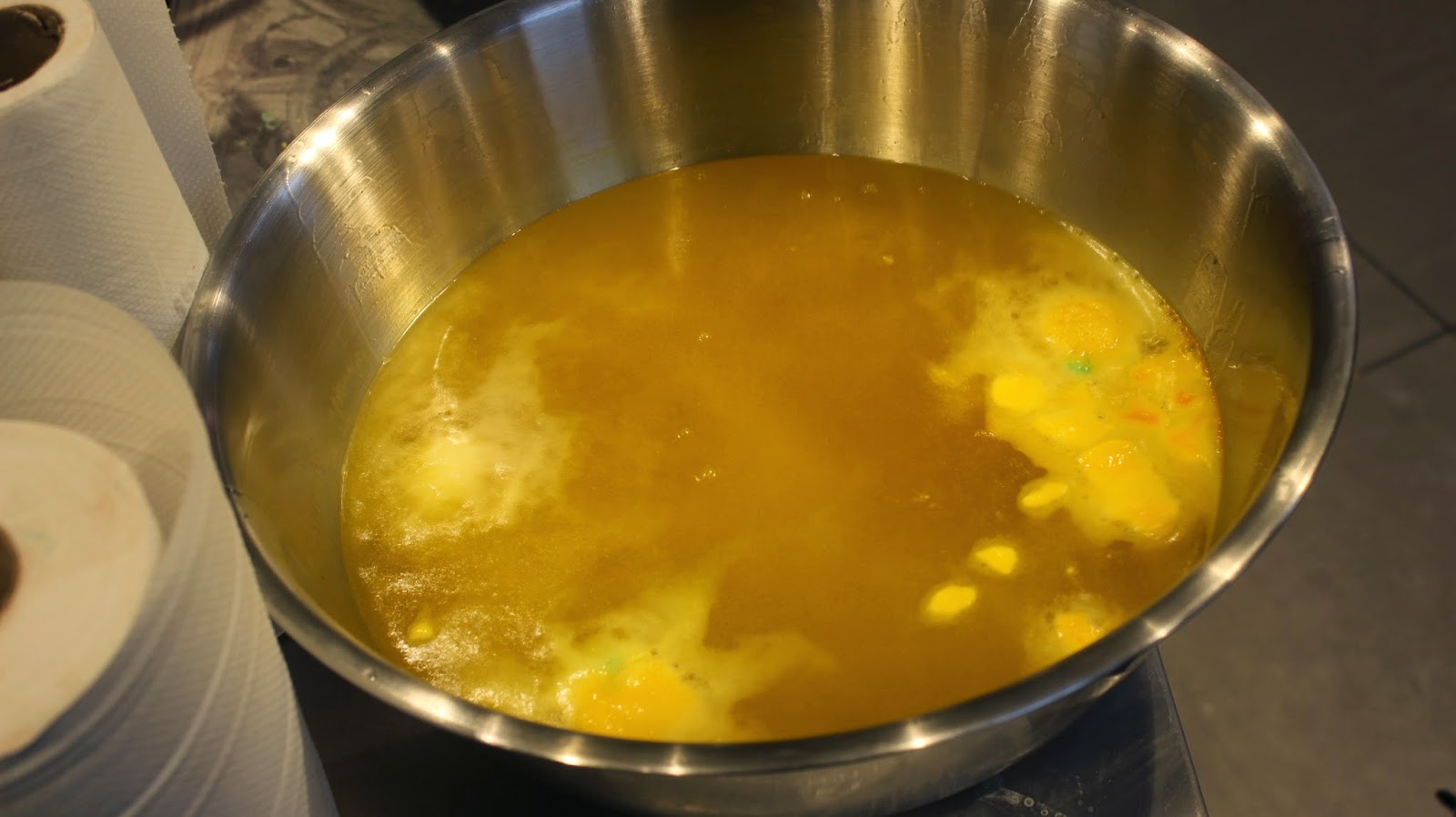 We then went onto the soaps... Lush have released a few new soaps that are limited edition but we only looked at two in particular. Carrot soap and Somewhere Over The Rainbow.

Carrot Soap is kind of what it says on the tin. Its soap that is shaped like a carrot when it is in its full size even with the green stalked top. The soap contains Sicilian lemon oil, bergamot and buchu oils which make it zesty and uplifting yet slighty spicy. It has a palm free base and a leaping white bunny (the fighting animal testing logo on the front of lush bags) in the middle of each piece of soap. Priced at £3.95 per 100g.


The next soap is called Somewhere Over The Rainbow. As you've guessed, the soap is just a massive glittery rainbow... I love a good glittery rainbow... This rainbow contains rose absolute, Sicilian mandarin and neroli oils.. It also contains silver lustre! The amazing thing about this soap is that you will never get the same piece because of the amount of colours! Priced at £4.25

So I love most of the Mothers Day and Easter range... I am going to rate it a 9.8/10... It would be a 10 if they gave a more fruity version of Snow Fairy in the Fluffy Egg... What are your opinions on the Easter and Mothers Day ranges at Lush? Comment down below!