Meow so the great people at Barburrito invited me to a masterclass. They also invited Luke. I just want to type about the amazing things that happened at the event. Please be aware that there will be quite a food pictures. I shall put the details to Barburrito (eg their website and stuff) at the bottom. I would also like to credit Abigail for the photography!

Let's flash back to a few weeks ago, I got an email from Barburrito... I wondered what it was as I normally get a tweet about an event and then slowly forget about it until the detailed email comes as I have other things to do. The email invited me to a Barburrito masterclass. This sounded pretty interesting. I had only had a burrito one time before the email. This was at Summer In The City. Let's just say it got messy... (*place innuendo here*) I read the email which talked about details and stuff and then talked to my friend Mike as he loves burritos so he may have more of a clue what the event could be about...

We got to the day of the event and ventured into Leeds. We wandered around into various places incuding Lush which I'm going to do a different post about.

We met up with my friend Abigail and headed to Barburrito which was a 2 minute walk from where we were which was great. We were a bit confused whether or not to go in as it wasn't 6 yet and we didn't know if it had started yet but as me and Abigail are both socially awkward we just walked in and hoped for the best. We were greeted by the lovely Stephanie from Barburrito. She was so lovely and friendly! We wandered on further and was introduced to some other bloggers.. I am going to put their links at the bottom of the page so if you want to check the lovely blogs then you can check them after reading the post.

We sat down and got a drink. We offered things from soda to tequila flavoured beer... We chose soda as it was just easier. Me and Luke don't drink often. We had tortilla chips on hand. Stephanie talked about Barburrito and the origins of it and I learnt quite a bit... Did you know Barburrito was originally founded in Manchester? Barburrito's first restaurant was in Manchester and now they have four in Manchester! Did you know that Barburrito was the first burrito bar in the UK?

Once we had learnt some information from the superb Stephanie, we were presented with a tray of ingredients in pots... Guess the ingredients. We got to taste every different component of a burrito at Barburrito. The options are endless! We then tried the pots again to detect any ingredients within the component. It was so much fun! We got to try the salsas from mild (pico de galo) to extra hot (Mule Driver.) I made Luke try a bit of Mule Driver just to see the reaction.. That may sound mean but it makes the event memorable! The guacamole was to die for! We also got to try the different fillings. The meats were flavoursome and succulent where as the vegetarian fillings exploded flavour!


We then chatted and ate some more chips. She talked a little bit more about Barburrito and how they became to create Barburrito and the introduction of Derek The Donkey! It was all just amazing. I love finding out little quirks about restaurants. 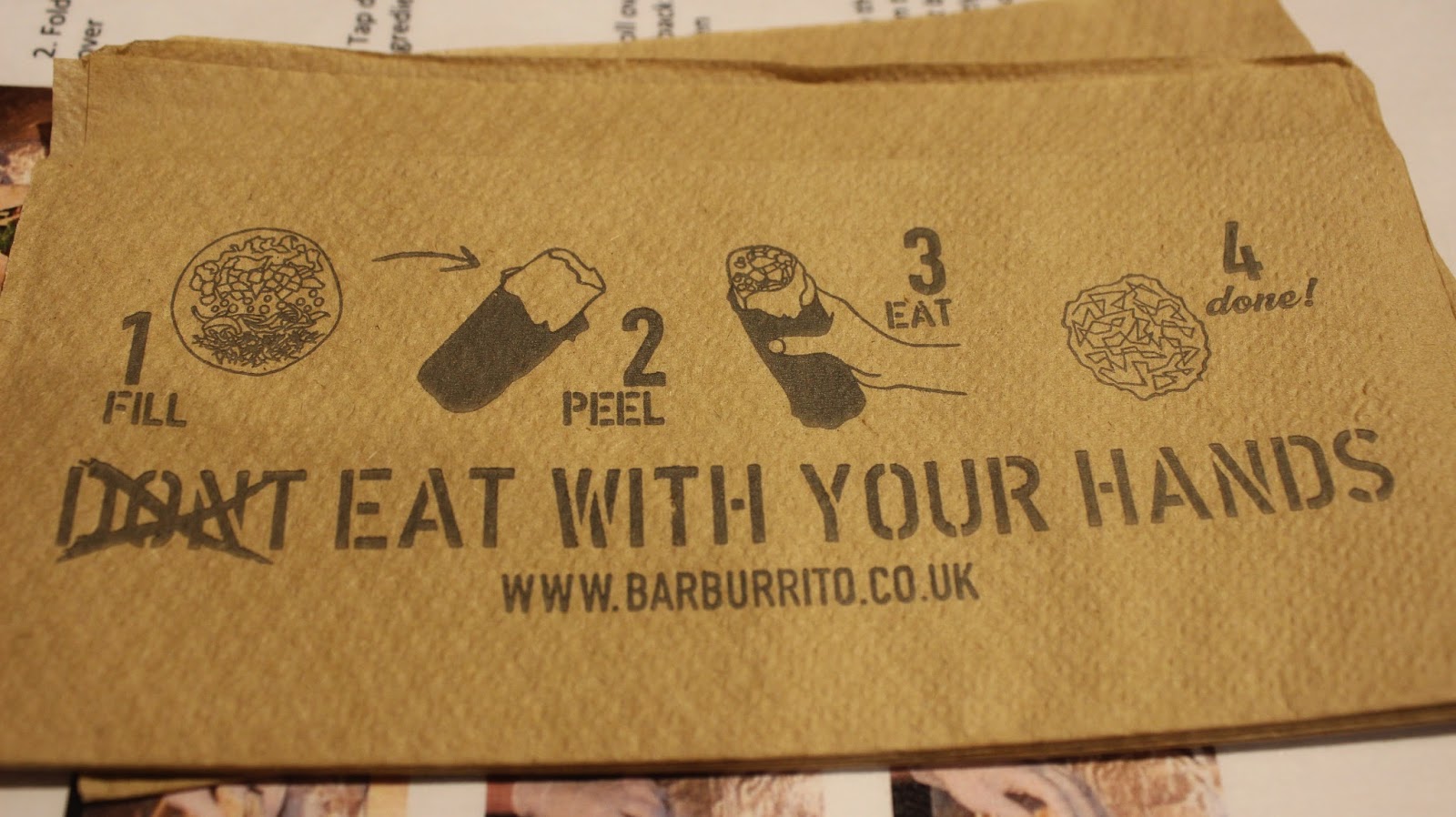 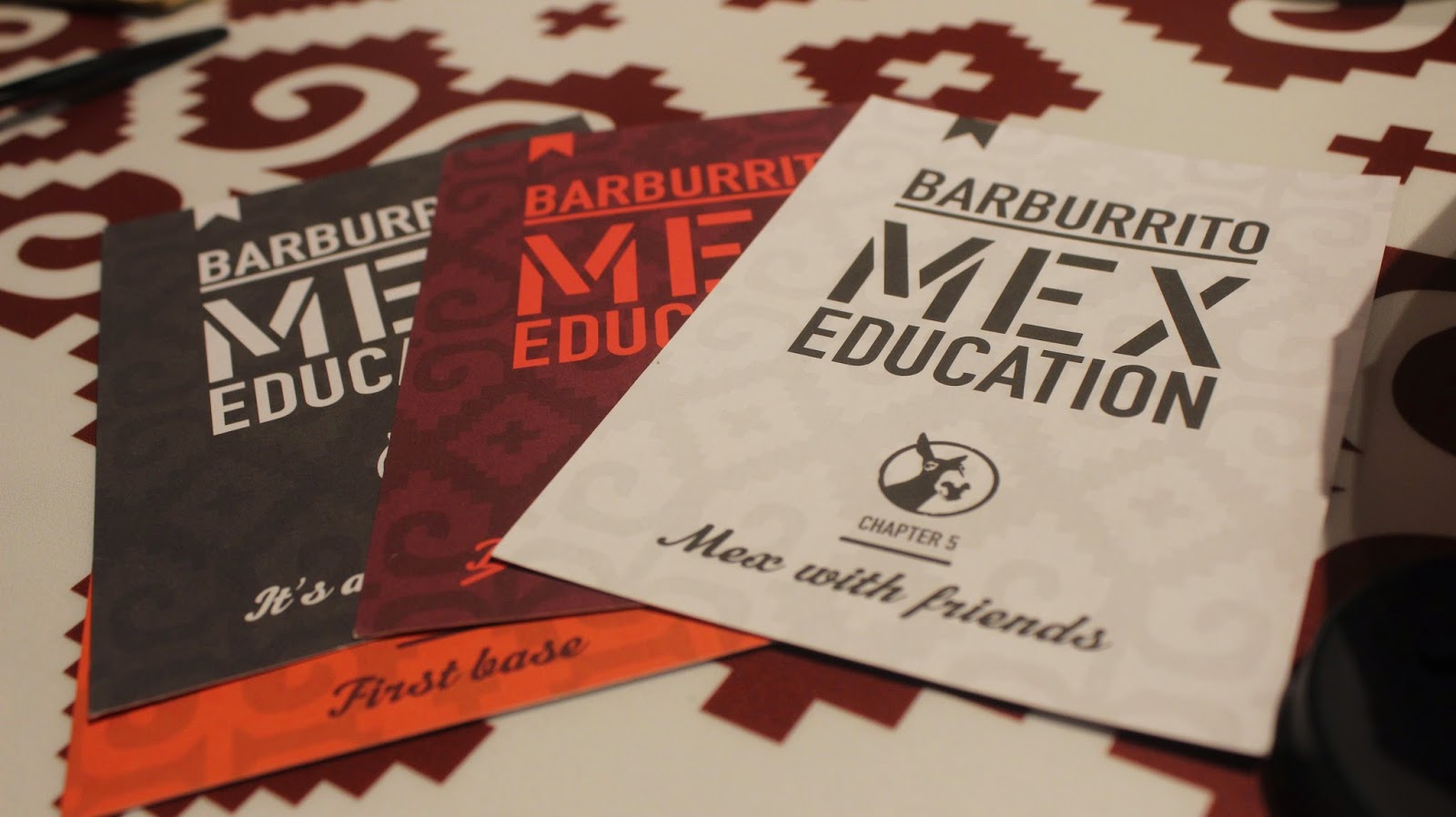 The next part was the most adventurous. Creating our own burritos! Just to ensure that we could wrap a burrito, we were given a fix sheet and a practice burrito filled with rice. I started to do well but then I slowly started to struggle and failed by the end. I won't be getting a job at Barburrito anytime soon... Once we had attempted to wrap a burrito, it was time to create our own burrito!


Luke went first. Stephanie helped him out and created his with him. Then it was my turn. I washed my hands and put on gloves for Health and Safety reasons. I then got some foil and heated up a tortilla wrap. I then got to choose the rice that I was going to fill my burrito. You could choose brown rice or lime and coriander rice.. 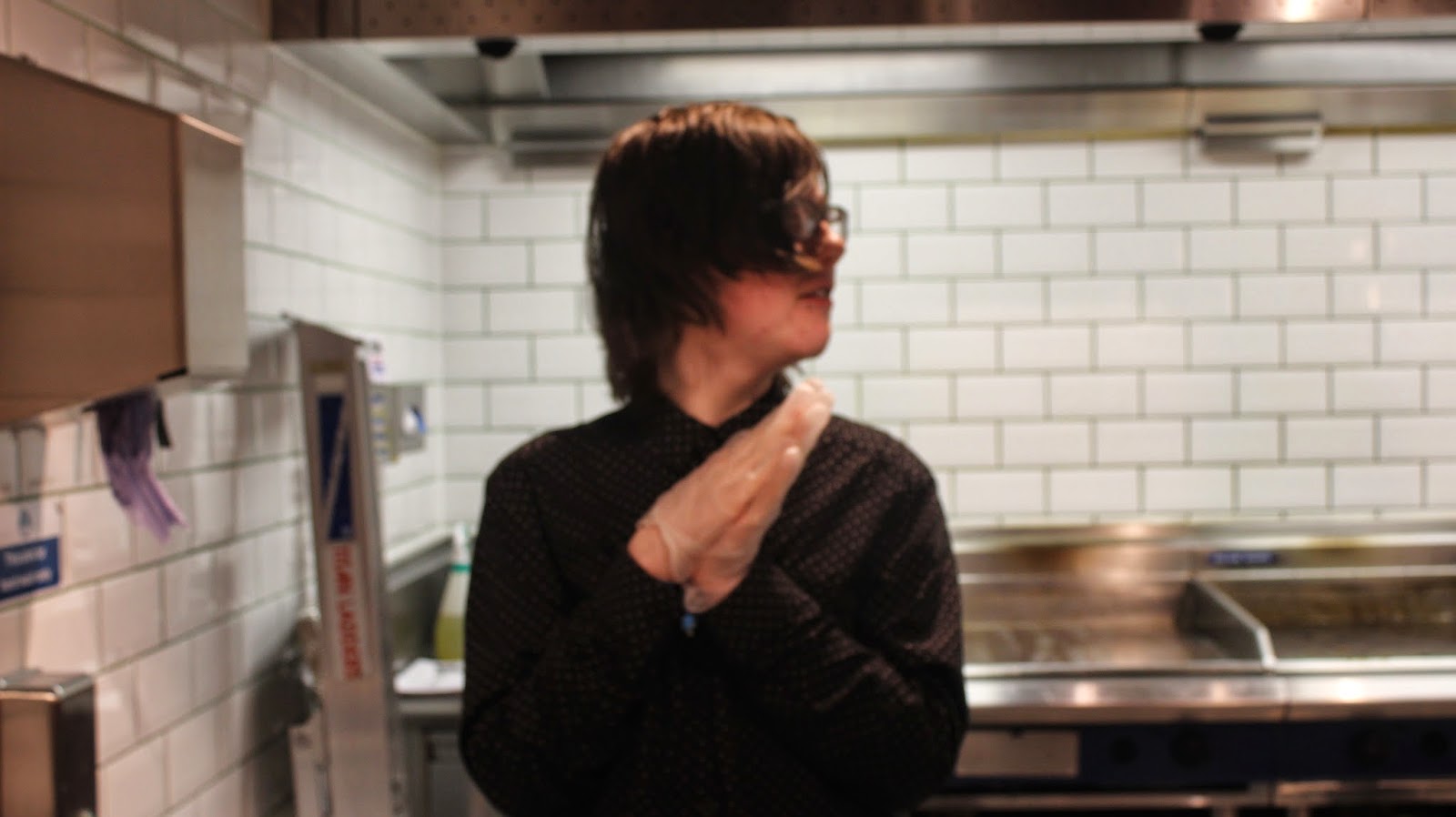 You can then choose your meat... Chargrilled Steak, Chargrilled Chicken, Slow cooked Pork, Spicy shredded Beef or flash fried vegetables (peppers, onions and mushrooms.) I chose Chargrilled Steak which was marinated for over 24 hours in Barburritos special mix.

Then we added the beans (theres two versions, spicy or a more mild baked bean one. Pinto or black bean.)
Then added extras such as soured cream, guacamole, grated cheese etc then we wrapped it up then in foil and ate it. 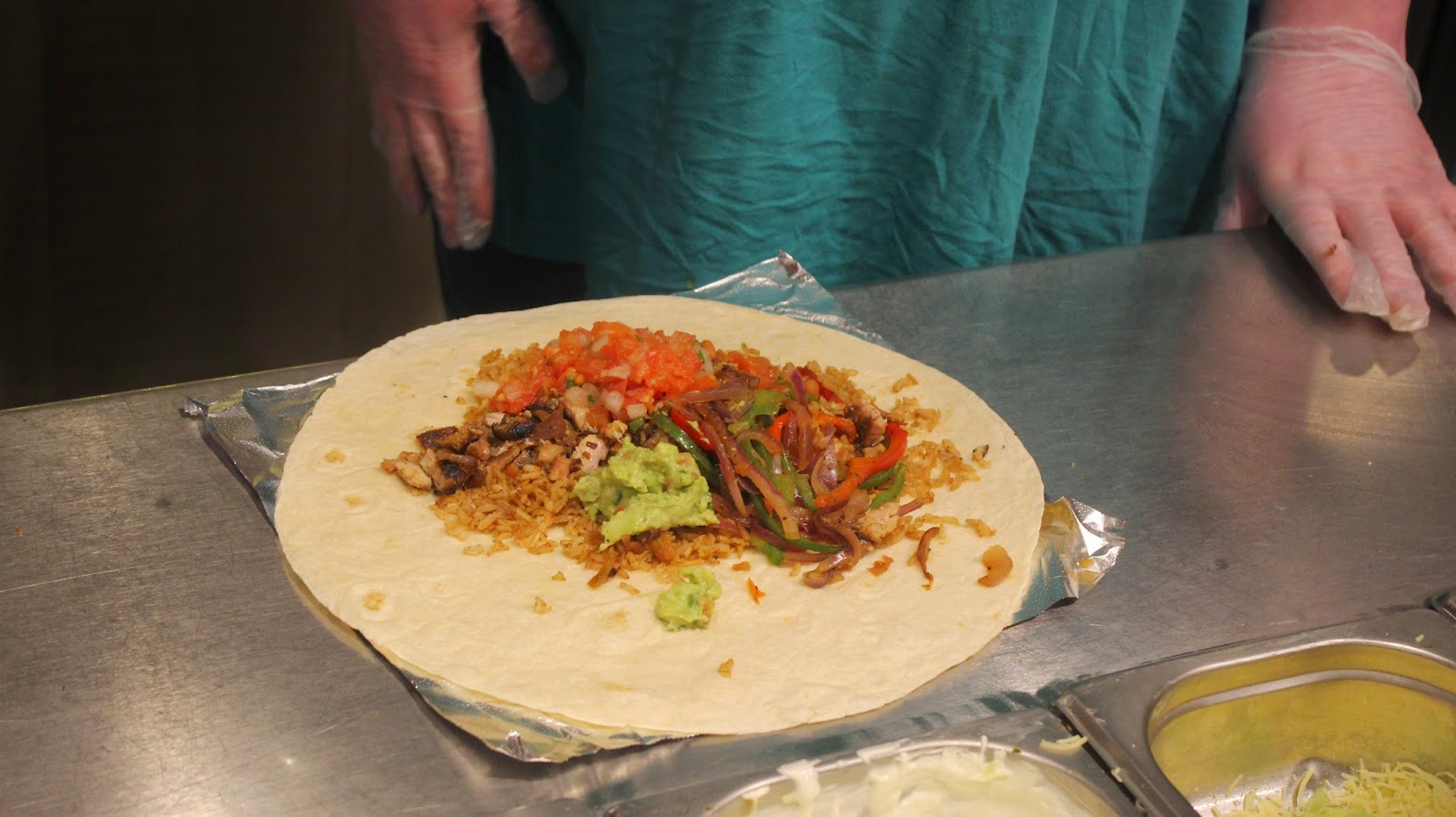 In mine, I got lime and coriander rice then I got chargrilled Steak, I then got the vhunkier beans which I think were the pinto beans. I then got the pico de galo salsa. I didn't want it too spicy as it would take over any of the other great tastes. I then got guacamole and soured cream. The freshest avocados are used in the guacamole which is prepared daily. I then got grated cheese on top which melted due to the residual heat of the other components in the burrito.We simply ate and then talked to everyone for a while and went home...
] 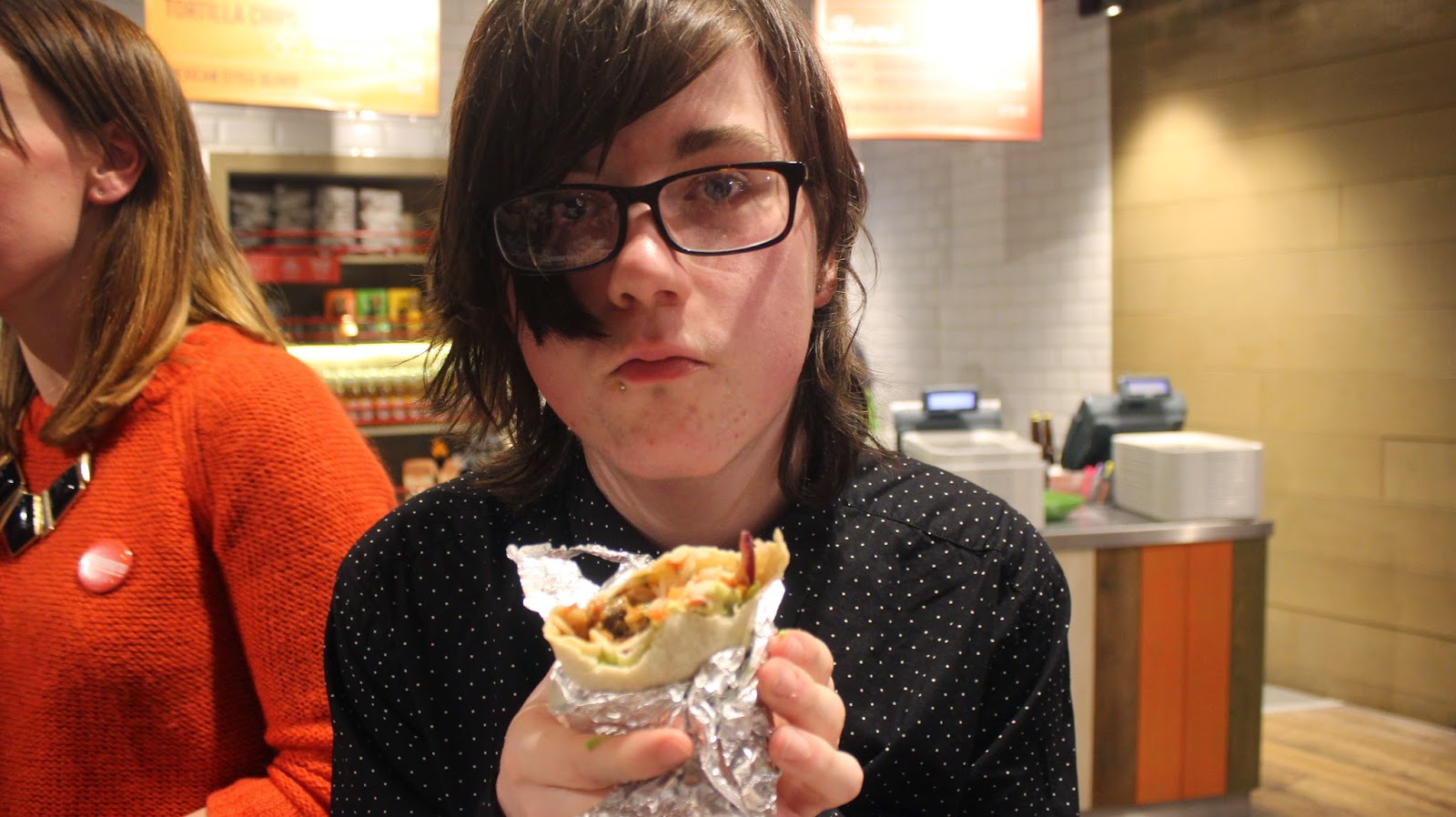 So this is the end of the blog post. I can't thank Stephanie enough for inviting me. I would also like to thank Abigail for coming along and I would like to thank the staff at Barburrito for being so lovely. Have you ever been to Barburrito? Have you tried the Salsa Selfie task with the Extreme Salsa? If so then comment down below so I can know and reply back! I hope that you've enjoyed this blog post and I hope to see you next time!