Welcome to a brand new blog post! I decided to get one of the Lush Community Favourite Shower Gels when they came out on the website a while ago, and I thought that I would tell you my thoughts on the product.

Lush released a range of Community Favourite Shower Gels a while ago, including, Intergalactic, Guardians Of The Forest, Sex Bomb, Goddess, Groovy Kind Of Love, and, Turmeric Latte. I have been loving the scent of the Turmeric Latte Bath Bomb since it was released for the anniversary of the Bath bomb and I knew that I had to pick it up the moment that I saw it on the website. 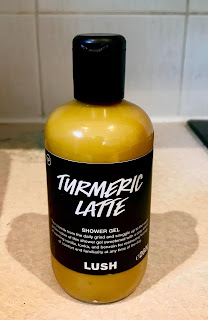 The texture of the product is quite creamy due to ingredients such as the Coconut Milk. This ingredient also helps to ensure that skin stays soft. The gel is just a little bit thinner than a Shower Cream from Lush. I would say that this is a thick sort of shower gel. I tried to move this via tilting my hand when first testing it out, and, it slowly moved after a minute. I loved it for this reason alone, as, I'm not the biggest fan of watery gels that instantly go everywhere as soon as you squeeze it out of the bottle, as it can ruin the shower experience a bit.

The scent of Turmeric Latte is an interesting one. When I say interesting, what I really mean, is that it has layers of scent which sounds even more ominous than 'interesting', I know. It is the truth though. First of all, you get the spicy warmth from Turmeric and Resinoid and then after a while, the sweetness comes through, via the Tonka and Coconut. The Shower Gel is the same but as there is Cocoa Powder, you get more of a roundness from the spicy sort of notes. I hate saying roundness but again it's truth. it makes everything that little bit more pronounced. If you have ever smelt Spicebomb from Viktor and Rolf, then imagine that with a tad more sweetness pumped into a Shower Gel. I have worn this on both Hot and Cold days and this scent is fabulous for both. Trust me, I know, I wore it during a heatwave... Personally, I prefer this on a colder day just because I think you can detect the spicier notes more on those cold days.

How It Performed When Using It:

When applying the product, you don't expect it to lather up that much, as sometimes, creamier products don't. Saying that, this lathered up quite a bit. I only needed one good squeeze to cover my entire body twice. The scent lingered for a good hour or so before the creaminess decided to become more of the prominent note. It kept my body moisturised for hours, to the point that I felt that I didn't;t need to put a moisturiser on top which was a first!

£15 for 250g. This is a lot for a shower gel, but if one squirt covers a slightly chubby person like me twice, then you know that a little goes a long way, so one bottle will last you ages. If you don't want to spend that much then I urge you to buy the Turmeric Latte Bath Bomb.

Overall, I would definitely give this a 9.5/10. My only downfall is the price, but at the end of the day, it is a massive bottle that will last you for a long long time!

I hope that you have enjoyed this post. What's your favourite Lush Shower Gel? Let me know down below!

Thanks for reading!
Jamie x
Posted by jamiesowden at August 15, 2019