Last week, I was invited to the preview of Banyan Bar & Restaurant within Leeds to have a look and try out some of their food and drink before it opened to the general public on Saturday that has just gone.

Banyan Bar & Restaurant is owned by Arc Inspirations. If you're from Leeds or go to Leeds often like myself then you might know Arc Inspirations via their other venues such as The Arc which is a bit of an obvious one, The Pit, Manhatta and Trio. The fun thing about Banyan is that it is named after the Banyan tree. Personally, I think that this is interesting because the restaurant has a little more of a history to it compared to some more mainstream bars whose names feel like that they were drawn out of a hat.

We entered the establishment and walked up the industrial influenced copper stairs to head into a private section of the restaurant. As soon as we got up the stairs, we were greeted by Kirstin who had invited us to the event, We had a look around and then myself and Luke were given a Pea & Mint Bellini. I know that this sounds like a strange drink to consume but it was honestly really nice. It was Prosecco layered with a homemade sugarsnap syrup, mint and an elderflower liqueur. I think that the pea sugar syrup wasn't really the main focus but added a hint of freshness to the drink and that it would be a great drink to have with some appetizers outside when the weather wants to be nice.

We then sat down and was given a Cucumber Cooler to drink. This contained Hendricks Gin, Giffards Pamplemousse (I have no idea either), elderflower liqueur, Passion Fruit and Pineapple syrup and Prosecco. The gin takes a back seat in this cocktail and the syrups take centre stage. I also like the fact that the syrups and the Prosecco give the drink a light and fruity taste and makes it one of those drinks that you would be drinking whilst catching up with your friends.

The first thing that I had to eat was the Crispy Duck Spring Rolls with an Oriental Dipping Sauce. The wrapper of the roll was crispy but flaky and I loved it! The meat was tender and fell apart but wasn't tough which is an amazing thing for Duck because sometimes its a bit tough and then the Duck is ruined. The dipping sauce was sweet but slightly spicy which I also quite liked. I think that these would be great to eat when catching up with friends with a few cocktails. 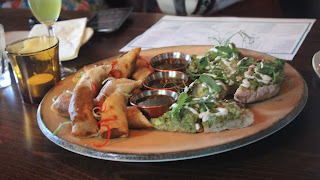 Tbe next dish that I sampled was Teriyaki Belly Pork (it is Pork Belly but the menu has called it Belly Pork...) I'm a massive fan of Pork Belly so I loved this! The teriyaki glaze was a bit sticky for a sample size and seemed a bit like too much effort just for a mealy piece but as the full size would be a lot bigger off the menu then I would love to enjoy this with either a cool refreshing citrus based cocktail or a nice cold Japanese located beer. 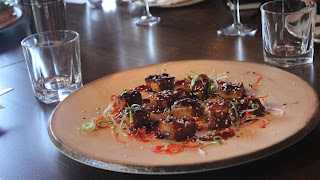 The last of the first nstallment of canapes were Crushed Avocado & Pea Toasts. Crushed Avo on Toast is all the rage at the minute and is on most brunch menus but weirdly this was the first time that I have had Crushed Avocado on Toast and I kind of liked it. The pea took more of a centre stage role within this dish and added a hint of sweetness to the food. It was served with a Wasabi Sour Cream which I loved. I always like my Avocado with some Lime or something acidic to give it a kick which this did. I also think that this would be good as a salad but turn the toast into croutons!

Before round 2 of canapes, we were served another crazy but cool cocktail. This one was in the form of a Rum & Raisin Mai Tai. This luscious drink contained Bacardi Oakheart, homemade Raisin syrup, Lime and Almonds. I hate raisins but honestly the raisin syrup was really nice in this, I think the sugar syrup sweetened the raisin taste a bit and made it a bit more bearable to the palate. This is quite a sweet drink though so I think that I would only be able to handle 2 of these at most. 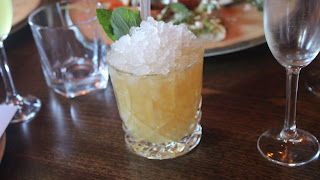 Deep fried Brie Wedges were offered up next but that sounded like death for someone who is lactose intolerant and honestly I'm not a massive fan of Brie when I do want to divulge into Cheese so I decided to opt out of trying this dish.

The next dish that we all shared was Tempura King Prawns. Now if you know me then I adore Ribs and I adore seafood so I was delighted when these were popped down on the table. The batter was so light and crispy but the Prawns were so plump and tender. It was just amazing, I think that these would be good to bulk order and share between people if out with friends or just a good dish to go along whilst perusing the menu for your main or for when you want to watch the world go by outside in the alfresco area. 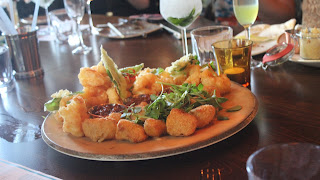 The final savoury dish was Crab on Toast. Now I can't really find it within the menu unless I haven't had a in depth look into the menu but this was amazing. I could honestly eat these all day. Savoury but sweet. Crisp but soft. Mmm... As I said, I love seafood! They're more of a brunch thing though in my eyes!

Time for the final round The drink that was served for this round was a Pistachio Espresso Martini. This contained Reyka Vodka, Tia Maria, espresso and homemade pistachio syrup. The pistachio comes out a lot in this and takes a good bit of the edge off from the strong coffee flavour via the Tia Maria and Espresso. Don't be fooled by the taste of coffee because it contains a good kick of alcohol. 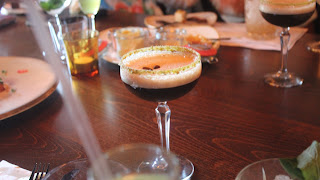 There was only 2 desserts on offer to try but they were both amazing in completely different ways!

The first one was a Salted Caramel and Chocolate Torte. Oh my god. This was amazing. Chocolate and caramel is always an amazing combo but in the form of a cake with an added kick of sea salt makes it that little bit more luxurious! I think that this dessert would be an amazing way to end a decadent evening but I do think that it could do with the addition of some tart fruit just to cut through the richness of the dish. 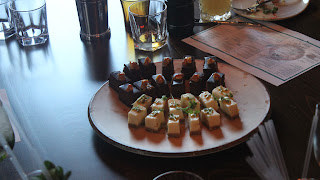 The last dessert was Vanilla Cheesecake with Spiced Sugar and Passion Fruit. I loved the cheesecake but honestly I think that the Passion Fruit could have been embedded into the Vanilla mix as the Passon Fruit was overcrowded via the spiciness in the spiced Sugar. I did like the mix of the spiciness of the sugar and the creaminess of the cheesecake.
.
Banyan Bar is located within a five minute walk from the train station and offers food all day including pies, sandwiches and other types of food, They also offer a brunch menu and a 2 for 1 cocktail offer which you can check via the website here.

I hope that you have enjoyed this blog post and all of the amazing food mentioned in this post. I hope that you come back next time for another post!

All of the food and drink was given in exchange of mentioning the restaurant on Social Media/via a blog post. All opinions and ramblings are my own.
Posted by jamiesowden at April 30, 2016