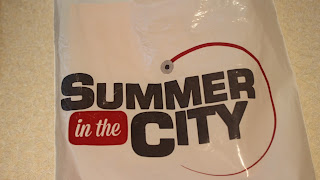 If you read my last post then you will know that I went to SITC (Summer In The City) this weekend and I thought that I would do a blog post all about the weekend. I'll be doing one about Lush Oxford Street and Summer In The City in a bit more detail as I don't want this blog post to be a ten thousand word essay.

Before going down to London, I had to make sure that everything was in the suitcase and that someone was in so I wouldn't have to triple check that all the doors were locked. I also decided that I was going to dye my hair an hour and half before going as I have to somehow leave the house in a mess before I leave to go somewhere...

We travelled to Bradford's train station and decided to get the tickets from a person. We eventually got the tickets and made our way to the platform where the train was waiting as it was about ten minutes before the train was meant to depart and as soon as we finally got to the train, it decided to shut the doors and go without us so we somehow had to spend four hours until the next one in Bradford.

We somehow slowly killed time within Bradford such as going somewhere to eat and using a lot of free Wifi. We made our way back up to the train station for the second time and finally got on the train. Luke had decided to listen to Joan Rivers 'I Hate Everyone Starting With Me' via Audible and I chose to alternate listening to music and listening to Tina Fey's 'Bossypants' via Audible. 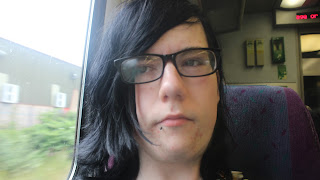 We finally got to Kings Cross and made our way to the Travelodge. We decided to take a taxi which was a massive mistake but we did it because we weren't that sure how to get there and we were too tired so it made sense at the time.

We finally got there and found out that we had a double bed and not two single beds but as the hotel was sold out which I'm guessing was for SITC, we just coped and realised that it could be a lot worse. We enjoyed some food for the night and got settled in afterwards.

The next day mainly consisted of going to Covent Garden as Luke wanted to find the Whittard Of Chelsea shop which didn't go that well but we wandered through a Jo Malone shop and I stopped myself going into CyberCandy as I love American sweets when I can afford them due to the prices. (If anyone wants to buy me American candy then get me Mint M&M's or Chocolate Chip Cookie Dough Pop Tarts...) We bought some drinks fot SITC and made our way back to the hotel.

On Saturday, we went to Excel for Summer In The City and then went back to the hotel as we were pretty drained. I'm going to be doing a full post on SITC so look out for that!

On Sunday, we went to Oxford Street. This included going to Whittard Of Chelsea, Lush, Topman and H&M. I'll be telling you why in another post and I'll be doing a post just for Lush so look out for them. 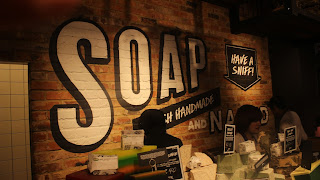 On Monday, we tried to go to Jamie Pine's meet up in Hyde Park which decided to relocate at the last minute so I ended up wandering around Hyde Park until I decided to go to Piccadilly Circus to track down Whole Foods Market to get some lactose free things. They'll be mentioned in another blog post. We went back to Kings Cross, got something to eat and waited for our train.

I hope you've enjoyed this little blog post. Look out for the other blog posts and don't forget to watch the video/vlog that goes along with this and I shall see you next time for another blog post!