Dreaming Of High Hopes In Our Roaring 20's | Panic! At The Disco - Pray For The Wicked - Track By Track Review

Welcome to a brand new blog post! I thought that, today, I would talk to you, all about, Panic! At The Disco's new album, 'Pray For The Wicked.'

I know that music based blog posts aren't for everyone, but, Jamie Sowden has a plethora of blog posts to suit everyone and their needs so, if this doesn't tickle your fancy then search the blog for something that will!

Pray For The Wicked is the sixth album from Panic! At The Disco This album is the follow up to the bands album, Death Of A Bachelor. This musical masterpiece was released on, 22nd of June this year, via Fueled By Ramen. 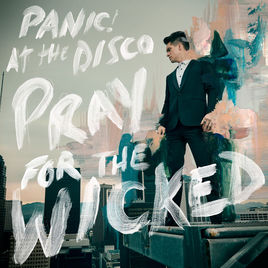 The album starts off with, (Fuck A) Silver Lining, this song has a pretty upbeat tempo, with legendary vocals that Brendon Urie is known for to match. This song seems to be about letting worries go, and makes great current cultural references via artists that are in the limelight of today, such as Beyonce  This up-tempo rock inspired anthem definitely sets the scene for a great album, for an intro song.

Say Amen (Saturday Night) talks about letting go of everything that the world has thrown at you on a Saturday Night. It also touches on about not regretting the adventures that you acquire within your life, and, that even though you may want to be better than you are but sometimes you're just you/ Brendon also talks slightly about ensuring that he cares fondly about his Mother which carries on into the next song. This is also the first within the album to actually reference the title of the album. The ong also carries on the theme of up-tempo, slightly rocky/messy songs which may cause the listener to feel 'pumped' for their own Saturday Night. If you don't listen to this on a Saturday Night, then are you actuallly enjoyiug your Saturday Night? Am i right, or, am i right?

This leads us into the next track, Hey Look Ma, I've Made It! This song talks about how far Brendon has came in his career. The song also talks about how friends can sometimes be deceiving and that 'if you don't know who to trust, then you'll be lonely.' This song also talks about the celebrity culture in society and what you can do about it. Most importantly it talks about well, ensuring that his Mum is proud of him. Again, this album wants thje audience to know that there is continuity as the sound and instruments used in this song are also used in High Hopes.

High Hopes, screams, believing in yourself when no one else would. I know that this is probably obvious from the lyrics, but, I think that this is a pretty honest yet empowering song that society has needed for sometime. It also touches on childhood and how it was and dreaming. I love this song. I also really love how the drums take centre stage in this song for me.

Next we go onto one of my favourite songs from this album. Roaring 20's. If you know me persoanlly, then you will probably know how much I've been banging on about this song for. For some reason, the tune of this gives me Moulin Rouge vibes? (Side note, Brendon doing a version of Moulin Rouge would be amazing especially after her role in Kinky Boots on the West End.) The song is on about well, being in your 20's, and trying to find yourself and figure out how you can battle life in your own way. This instantly resonates with me. 'I don't even know me' screams out to me because well I can definitely relate to that. The song also talks about using drinks and drugs to get through situations and I think that anyone in their twenties can understand how that feels on some form of level. It also talks about coping with things like anxiety and being paranoid. This song just based on it's lyric's, is a song that needs to be pushed further and further into the musical limelight.

Dancing's Not A Crime instantly sounds like it could have a encoded message of the women aren't legally allowed to dance in the street in Saudi Arabia. I love the free flowing spirit of this song. I also think that the track actually has a good rhythm that makes you want to instantly dance along, no matter what. I also love the lyric 'I just wanna be your boyfriend, girlfriend' I can imagine listening to this song on a hot Summer's evening where people don't really care, but instead are enjoying the music and weather.

One Of The Drunks is up next. This song instantly talks about enjoying a good night every weekend after another one of those despicable weeks. 'Bourbon High' pretty much sums up this song as you feel ecstatic when you're getting drunk, but. when it comes around every week to try and get yourself to relax and calm down, it just kind of becomes a bit mundane, 'I guess'. This song is saying, you've done this, you're one of us now. I love the sort of slightly futuristic tune going on within this song. I honestly think that this is a great song with a target audience of those, who are now figuring out what it feels like to be an adult.

'The Overpass talks about being sorry, and seeing things that you don't want to. It also talks about love and reminds me of the This Is Gospel album for some weird reason. This song is well, about not letting go of the past. I also love the slight sort of slowed down spoken verse, as, it contrasts against the high notes that are within the song. I also see this song being featured in quite a few films. I love the sort of rollercoaster up and down sound that is going on throughout this song.

One Of The Clouds is a weird one, but I love it. The sort of electronic yet dreamy intro reminds me kind of an S Club 7 ballad, then the other instruments kick in and it shows itself as a messy rock inspired quirky ballad with enough emotion and passion to send you to the clouds and back. I also love the lyrics as it talks about not being able to feel or  be anything in the clouds which relates to the destigmatisation and visibility of mental health which has been reinforced all the way throughout this album.

If you didn't get that Bourbon/Alcohol was a big theme of this album, then, welcome to Old Fashioned. A song that is named after a Whiskey based cocktail. This song is about remembering when everything was calm and great. I also love the sort of calm guitar centred moments within this song. I also love the random moments of 'get boozy. boozy boozy' throughout the track. It's also a great song to listen to with a cocktail. I just love the calm yet catchy vibe of the song.

Last but not least, Dying In L.A. I love this song just because it's raw and honest. I adore the piano intro as you instantly know that the song is more on the emotional side. Again, this song has some bits of mental health integrated into it. 'Nobody knows when you're dying in L.A' because everyones too busy and trying to make their own living, that they don't stop to ensure people that around them are okay. I love the soft vocals in this song that slowly build up. It gives me that sort of song that you put on to stare out of the window when it's raining.

I loved this album, honestly, it's an absolute roller coaster and I love it for that. I love the references to mental health and alcohol just trying to tackle life all the way through. I think that some songs are definitely meant for a mood, and others are meant for another. I don't think that I will ever stop listening to Roaring 20's. This is definitely an album that will be listened for years to come!

Have you listened to Pray For The Wicked? What's your favourite song? Let me know donwn below!

Check out Panic! At The Disco via clicking here. Listen to Pray For The Wicked via streaming services such as Spotify and Apple Music.

Thanks for reading!Jamie x
Posted by jamiesowden at July 10, 2018