Welcome to a brand new blog post! Today, I thought that, I would talk to you all about a tour that I will be attending soon. This isn't a spon or anything like that, I just like the music and the person of whom I'm promoting, and, I think that it's great to promote artists when possible! 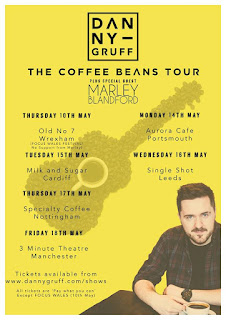 Wrexham born singer songwriter Danny Gruff got his big banging break after supporting artists like Frank Turner and Bastille to name a few. Within 2015, Danny created a project which was dubbed ONTAW which consisted of releasing one new track a week for a year which then led him onto a 2 official UK tours including a first headline tour. Danny has the spent since October creating his self titled album via the funds from singles, merchandise and tours. Danny is known for his cheeky yet friendly personality.

In June 2017, Danny released a self titled album consisting of 13 amazing songs, under an album. This album covers a plethora of genres, themes and tempos, to suit a magnitude of moods. If you want to read more about what I thought about this breathtaking album then click here to read my full review of Coffee Beans.

To match the name of the album, Danny thought that, it would be an interesting idea to hold the dates of the tour in actual coffee shops, and, small venues around the UK. Not only would it showcase the symbolism of the album as a whole, but, it would also give Danny and his audience the perfect atmosphere for a personal, and, intimate performance.

The dates that are still available to purchase are, Leeds, Manchester, Nottingham, Cardiff, and, Portsmouth. Click here to find your nearest gig and purchase tickets.

Check out Danny's music via his Spotify.

Visit Danny's website to find out more about him and to purchase merchandise.

I hope that you have enjoyed this blog post, Let me know if you will be attending any of the dates. Comment down below with your favourite song from Danny Gruff. I've also included the lyric video to Coffee Beans just in case you want to check it out.

Thanks for reading!
Jamie x
Posted by jamiesowden at April 30, 2018