Welcome to another blog post! I went to the Alhambra last week to see The Addams Family Musical and I thought that I'd talk to you all about it as I love a good musical! 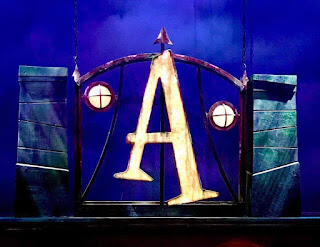 There will be no spoilers within this post except for the description of the musical but its not really spoilers.

The background of this musical is that the family have grown up and Wednesday has found a boyfriend and Wednesday thinks its a great idea to bring the other family around for dinner but of course it's never easy meeting The Addams Family for the first time.

We arrived at the Bradford Alhambra and slowly made our way to the stalls section as the seats that we had booked were within the stalls which personally I think are the best when it comes to musicals. I know that they can be a little bit more expensive but they're definitely worth it. We found our seats and waited for it to start via The Hand getting us to clap along to the theme tune.

We watched the musical and enjoyed the songs which fitted well with the slightly macabre yet slight yet comedic family that the world has become well established with.

I'm not to going to mention every member of the cast.

Samantha Womack is well known for being Ronnie Mitchell on the BBC soap EastEnders so I was bit hesitant on how she would portray Morticia but she lived up to it! It was very obvious that she had researched the role very well. She sung the songs perfectly and I honestly thinl that she would be great if she was to just do West End for the rest of her life.

I already knew that Carrie Hope Fletcher would make an amazing Wednesday and she did. She screamed Wednesday Addams realness and killed it with all the songs. Carrie can seriously do anything even pull off an American Addams Family accent.

Last but not least, Oliver Ormson played Wednesday's beau., I loved him. He played the character amazingly and he sung the songs beautifully and I think that he should be in every musical going which sounds a bit over the top but Oliver was seriously amazing.

Have you seen The Addams Family Musical? Let me know down below!

Thanks for reading this post. I hope that you've enjoyed this theatre based post and I can't wait to see you next time for another blog post.

Thanks for reading!
Jamie x
Posted by jamiesowden at July 20, 2017