So like every other restaurant tasting, this one started with myself and Luke getting the train into Leeds. We decided to then get a train to Burley Park and then an Uber to MOD Pizza as I sometimes have a bit of difficulty locating where things are if I have never been there before so it just seemed easier to finally use Uber and get there quickly and safely. 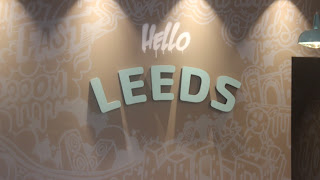 Once we got to our destination, we were greeted by a great guy outside, we had a little discussion about things such as Disney and then we made our way inside. We were greeted by a host and the great guys behind the guys behind the counter which is an amazing feature in my opinion. It just makes the whole place feel more welcoming compared to any sort of Pizza place where you feel a bit uncomfortable because they write the food down, bring the food and thats it.

MOD Pizza is a pizza company that originally started within Seattle just like the very well known Starbucks did... MOD actually stands for Made On Demand and sums up the company very well because thats the concept of the pizzas. They're made on demand of yourself so you can have your pizza however you like it. At the same time of making the pizzas personalised, MOD wanted to make them affordable so families could come and enjoy a pizza and have a great time therefore all pizzas are £7.77 (I think... I know that they are £7 something.) You can even get them ordered which is amazing in my opinion. They have only just set up shot within UK via coming straight to Leeds but they will soon be setting up Brighton. I'm honestly expecting MOD Pizza to take the UK by storm.

We were then greeted by a woman called Celise who told us all about MOD Pizza and basically told me what I have told you above but in a bit more detail. We then chose a table, the manager of the new Leeds store then came up and said hi to us and then told me that I had somehow chosen the only dirty table in the restaurant and then cleaned it straightaway. I mean I chose there because there was a massive window behind me therefore any pictures would have a good chunk of natural lighting but hey ho I pick good tables!

We then discussed what we wanted because there is quite a lot of choice at MOD. Luke finally decided on a Caspian pizza but wanted one of the things changing (thats the great thing about MOD, you can have one of their already combo'd pizzas and change something if you don't like it or build your own) and I decided that I would build my own! Celise then asked if I wanted any milkshakes as I was browsing the milkshake board. I decided to go for an Oreo one as I love Oreos and I chose a Strawberry one for Luke.

When you go up to order your pizza, you are presented with a Subway sort of counter where you tell the person how many pizza's you want etc and then if you want to build your own etc, they write your name down and you move along to create your own pizzas etc. You're presented with sauce, cheese, meat, vegetables and extras. I went for a tomato sauce base because I wanted to let the toppings do all of the talking. I then went for lactose free cheese because I wanted to see what the cheese was like and because well me and lactose don't get on sometimes to put it politely. I then decided to choose Grilled Chicken, Bacon and Chorizo... I love Chicken, I love the crispiness of Bacon and I love the heat of Chorizo! I then decided to go for Roasted Red Peppers, Roasted Red Onion and Pineapple and then topped it off with Roasted Cauliflower and Asparagus. Yes, you read right! I also got some Garlic Strips with Ranch Sauce because I love garlic bread and Ranch sauce!

The Garlic Strips came out first. They were amazing. They were topped with Parmesan which made them slightly salty but it was nice in contrast to strong Garlic. The garlic was pretty strong but I love it when Garlic Bread is extra Garlicky. I'm not sure why but I really do so it was amazing. The base was crispy on the edges but soft and served quite well as a starter/side. The Ranch sauce was to die for. It was slightly tart which cut through all of the garlic. The dip was also quite cool which contrasted really well with the hot temperature of the strips and made it quite refreshing to eat. If I was with a lot of friends then I'd order some drinks and a couple of these and just chat away.  These get a 9.5/10. The only problem is that I had to share them! 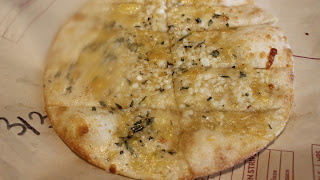 The drinks then came. They were amazing. If you go onto over to Luke's post (I'll link when its live) then you'll be able to find out more about the Strawberry milkshake! I had a little sip and I loved it and I'm not a fan of Strawberry flavoured milkshakes. The Oreo one was too die for! I love Oreos! Sometimes when you ask for an Oreo Milkshake they just sprinkle some oreo crumbs on top but this one had Oreo running all the way through it and as it had a Vanilla base it literally tasted like the cream and biscuit bit of an Oreo. I mean my stomach doesn't agree that much with dairy but oh my god I would have these again and again and suffer the consequences. 9.7/10. Anything Oreo based could always do with more Oreo added... There's never too much Oreo! 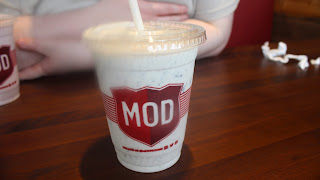 Luke's pizza came out and I had a slice because well it would be rude not to... I did go up and order it and I did make an adjustment to it (removing Blue Cheese and adding Bacon) so I wanted to see if my adjustments were a good move and they were! It was so good! The Chicken, Bacon and Onion together were just amazing and that BBQ swirl made it a tad messy but definitely worth it. I mean you might want to have a few napkins at hand for when eating this. 9.5/10. If you want to read a more in depth post about the Caspian pizza then go and read Luke's post. 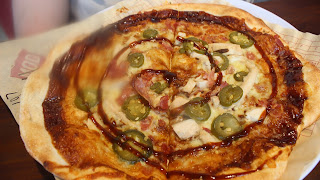 My pizza came out! It was delectable! The base was soft in the middle but crunchy on the edges, you couldn't tell the difference in the taste of Cheese from the Mozzarella to the Lacto Free. The succulent Chicken against the crispy Bacon was so good and then the heat from the Chorizo came afterwards. It was a gentle heat which was quite nice! I love Pineapple on a pizza mainly because I love Pineapple. It worked well against the saltiness of the Bacon! The roasted peppers and onions added a bit of softness to the dish which was different. The Roasted Cauliflower was also slightly different. I would never think to put Cauliflower on a pizza but it really worked. It added a slight sweetness and again added that bit of softness to the crunchy Italian dish. The Asparagus added a bit of crunch. All in all a great pizza! 9.8/10. I like to not give anything a bang on 10 because theres always things that can be tweaked with. 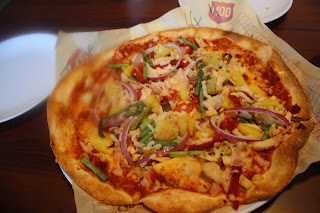 I then had one of their homemade drinks. Celise was telling me all about how she had made the Strawberry Lemonade so I decided to go with that whilst Luke went for a Traditional Lemonade. The Strawberry Lemonade tasted like Pink Lemonade Lucozade but more zingy. You could tell that it had been homemade and that it was made with love. It just tasted like Summer within a drink! 9.8/10. 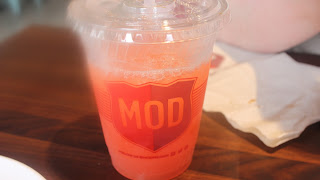 All in all, MOD Pizza serves delicious food and drink at a great price. The restaurant has a great vibe especially with the staff shouting hi and bye when you enter/go. I will definitely be coming back to have more pizza and a good few more drinks. (They also have a Coke shots machine so you can have unlimited drinks which is great for when its really warm or if you've got young ones coming along.)

If you haven't been to MOD Pizza within Cardigan Fields within Leeds then I would urge you to go straight away because it is completely worth it!

I hope that you have enjoyed this post! If you were to make your own ultimate pizza then what would be on it? Let me know down below!