Welcome to a brand new post! I saw that Yo! sushi had released a range at Iceland so I thought that I would grab something from the range and tell you all my thoughts about it.

The Yo! sushi range at Iceland includes Tempura Prawns, Gyozas, Bao Kits and much more such as Korean Fried Chicken and Ice Cream Mochi. 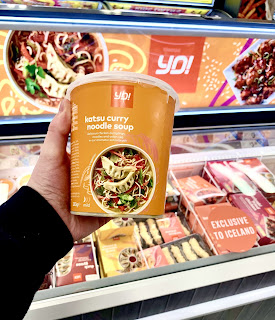 The way to cook this confused me a bit. Some of the Asian noodle bowls/soups that I’ve cooked before have just required boiling water from a kettle to cook, whereas this product requires boiling water from the kettle but also the repetitive task of putting it in the microwave, taking it out, stirring and repeat. I guess this was to ensure that the Chicken was fully cooked but it just meant that it took a while and became quite hot to handle especially for someone who has a tendency to not have the best of dexterity skills in the world.

The texture of this soup was everything that I’ve been wanting lately. I don’t know if it’s because of the rollercoaster weather that is going on in the UK at the moment but I’ve been craving a soup with every texture going on at the moment. The texture of the dumplings which were the first thing my spoon fell onto has not only an amazing chew to them but also had a a sublime soft and supple texture to them due to the meaty interior. This alone was the best of both worlds but was only the start of the texture train that happened within this bowl of soup. The noodles added a slight sort of bouncy texture to the dish which I really loved alongside the slight chew of the dumpling wrapper. These noodles weren’t like an udon noodle which I learned to love during my time living in Leeds during my undergraduate University degree nevertheless they were excellent to eat. The Asian Veg added a much need crunch which I really loved as it contrasted against the supple filling of the dumplings and all of the chew that was going on. Finally, the soup added a sort of creamy celebrity texture to the dish which made everything sort of combine together into a rich harmonious dish which I really enjoyed.

The first thing that jumped into my mouth was the dumplings themselves. To some, dumpling wrappers may taste bland which I completely understand due to them being made from flour and water, but to me, they kind of give out a sort of comforting taste which I quite like especially when boiled/steamed. The chicken that laid inside of these delicious dumplings gave off a wonderful amount of umami which made them not only effortless to eat but also addictive and excellent . The noodles again added a sort of comforting slightly creaminess to the dish. The vegetables helped to cut through all of the umami and savouriness that the dumplings gave to my tastebuds and honestly ensured that this dish wasn’t bland. The curry itself gave off a creamy yet quite sweet taste which I was surprised at as the Japanese curries that I’ve had in the past have been more peppery than sweet whereas this one was more sweet than peppery and spicy.

Would I buy it again? Yes, I would. I’m giving this an 8/10 as it definitely blew my expectiations of something frozen from Yo! Way out of the park. I love all the components and it’s actually decent for the price. I don’t think I would get this all the time but I would get it when I want a heart warm lunch or when I’m craving Japanese Curry.  I definitely advise that if you are thinking of trying the range then you should get this!

Have you tried anything from YoB Sushi before? Let me know down below!