Let's Talk About Something That Happened To Me During The Pandemic

Welcome to a brand new blog post. I thought that today, I would talk to you all about something quite serious. 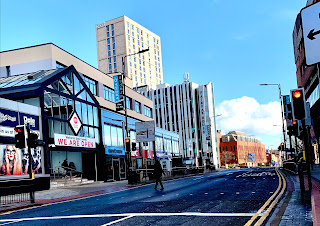 When society was in the midst of attempting to come back to a sense of 'normality' in the beginning of September, I decided that I would participate in doing a Masters Degree at University. At the same time, Leeds City Centre was having some major redevelopment work going on which meant that the public transport to and from Bradford was a bit of a nightmare...

For the first few wonderful weeks of being back at Leeds Beckett University, the buses moved to a completely different part of the city centre. Sadly, I had zero idea that this was happening so I got off the bus that day at the Starbucks in Leeds City Centre, near The Light Shopping Centre, due to being familiar with the Shopping Centre, but when I had finished University that day, everything became an adventure that I never want to relive...

I arrived at the location of where the bus stop had been for several months to find out that it had completely moved with no notification except a visual map that resembled a flowchart via having symbols and numbers all over it. Sadly, it was night-time. The disability that I have (Retinitis Pigmentosa/RP) affects me mainly within the aspects of depth perception, night blindness and tunnel vision, this meant that I was unable to see the 'notice' due to it being dark. I tried to use my phones torch and Google Maps on my phone, but I had no luck.

I decided to travel to the location of where the bus used to be before the re-development work started to see whether it had moved back there or not. When I arrived there whilst using the cane that I sometimes use when I really need to use it, I tried to then again use my phone torch to attempt to see the board with the timetable and buses available on it. Now, due to the metal reflecting, I can sometimes see this due to it being contrasting with the darkness of the outside world. Whilst having my phone in my hand with my cane folded and wrapped around my wrist, I met by someone who decided to start to shout to me about socially distance. I did mention that I had a folded cane and that I had a visual impairment. She decided to carry on shouting at me about socially distancing which just made me more and more anxious even though I had explained that a: I can't see in the dark, b: I had a cane (when mentioning or showing the cane to strangers they normally understand that you have a disability due to associating a visual aid to a disability which is problematic to this day) and c: that not being able to see affects knowing how far 2m is and that I didn't realise she was there due to the darkness. She snipped that the bus I wanted wasn't at the stop and kept stating about socially distancing even though I had said what I had said.

I decided to travel to the Bus Station at the bottom of Leeds City Centre whilst using my cane to hopefully get the bus home safely and without being shouted at. Whilst I was walking away, I was still met with ableist slurs, swearing. Whilst I started to walk away, she had decided to follow me which honestly, not only made me more anxious but slightly scared for my life especially with only being able to walk at a certain speed with a cane in the dark.

I thankfully made it to the Bus Station as quickly as I possibly could go and found out that my bus was at a stand. Thank goodness. I got on and was on my way home safely and soundly.

Why am I deciding to write about this now? With the restrictions lifting quite a bit, whether this be socially meeting up outside or non-essential retail opening, I feel that I need to reiterate that some people may not be able to partake in some of the requirements of being social and honestly just living during a time where a worldwide pandemic is going on and that we all need to realise this and be kind to all. Disabilities come in many forms and are on a mass spectrum and we don't know what people are going through so instantly screaming and following them is something that we shouldn't do just because they can't do something that the government is urging everyone to do. I also think that the ways that society and the government have put in place to cope with COVID are quite ableist and even though that's probably for another time, I think that we should all just take things into perspective.

I did also contact Metro during the time of this happening, but I never got a response but if Metro do see this, you really need to ensure that customers are kind to others right now and that you have accessible to all features at your bus stops and shelters.

Have you had any bad experience during the pandemic? Let me know down below.