Having A Punk Pizza Party | Adore Delano A Pizza Me Manchester

Welcome to a brand new blog post! I went to see Adore Delano a while ago in Manchester, and, I thought that today I would talk to you all about it.

If you don't know who Adore Delano is? Then where have you been for the past few years?! Adore Delano (Danny Noriega) is a drag entertainer, who first got caught the people's eye via the American talent show, American Idol as Danny. Some years later, Danny grabbed the worlds attention, via, participating in Season Six of RuPauls Drag Race, as Adore Delano. Adore Delano is a drag performer who bases their aesthetic on the punk and grunge movements, and from other aspects of pop culture. 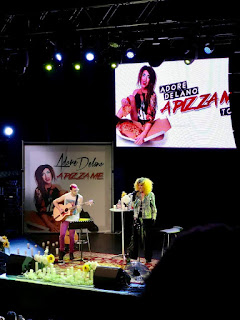 Myself and my friend Alex, decided to go to the A Pizza Me tour, as I relate to a lot of Danny and Adore's views on the world and I love Adore's aesthetic and the grunge/punk movement. I was already in Manchester that weekend, to see Panic! At The Disco (read that post here), so it made sense to make the weekend even better by going to see Adore the day after.

We got to the venue and made our way to the balcony to watch the show. The venue increased the excitement for the show via playing songs from other Drag Race alumni and adverts for shows that were coming up from other drag entertainers.

The show started off with a pre show by Victoria Secret, a drag entertainer from Dublin. They started off the night via telling stories and antics and even included a mix of songs based off the story of Nadine Coyle, from lying via her age to get onto an Irish talent show to being a part of one of the UK's biggest airl groups.

After this, Victoria encouraged four of Adore's fans to get onto the stage for a lip sync to win some Adore merchandise. Even though the lip sync became a dance off, it was still amazing to see people get into the groove of things.

When Adore came to the stage, they started off the show with a rendition of, Britney Spears' top hit 'Piece Of Me'. This mixed with the fact that Adore loves Pizza creates the title of the tour. The rendition was amazing and raw. A perfect way to describe the full show. Adore carried on with more songs, played via just two instruments, their voice and a guitar. After some conversations about her life and past, and a couple of songs, a Q&A session happened. Adore answered questions in relation to, Drag Race, All Stars, the punk movement, favourite songs and artists and much more. Adore even makes references to such TV shows via, adlibing during one of the songs they perform within the set to, 'I don't belong here anymore, All Stars.' They also talk about that its their first tour since sobriety and talks frankly about it during the set.

One of the best highlights throughout the show, was when Adore sang, Cher's infamous track, 'Believe'. Not only did Adore perform it with poise and class, but she explained that it was one of her late Dads favourite song, which meant that you could tell that Adore was pouring all of their feelings into the song and everyone in the room could tell this. I loved the slow acoustic version of it compared to the electronic anthem that we all know and love. All in all, I adored the A Pizza Me show at Manchester, and wish that I could have about five pieces more of Adore, because, I'm greedy like that.

Thanks for reading!
Jamie x
Posted by jamiesowden at June 05, 2019