Welcome to a brand new blog post. I finally went to Cinnabon in Manchester and I thought that today I would talk to you all about my thoughts on trying Cinnabon. 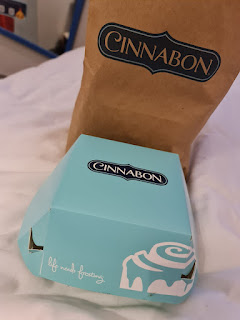 Now Cinnabon is known in the States for being that one place in a mall food court you can sniff out instantly and is the first place people think of when you say Cinnamon Rolls, but sadly that’s no5 the case in the UK. Sadly Cinnabon has been non-existent in the UK until now.

That’s why when I found out that Cinnabon had opened up in Manchester Deangate, I knew that I had to go.

Myself, Alex and a friend decided to find the location of this Cinnabon because well we obviously had to try them out!

Once we had found the location, we all entered the store. Once that door had shut behind me, the smell of comforting Cinnamon enveloped me. I was in heaven just from the scent of this store and started to grasp why  the USA loved Cinnabon so much.

We decided to get four of tbe original Cinnabon. The Bun that started it all. I saw on the website and on the board that it was meant to be one price, but came out to a completely different price when we ordered them. I don’t know if this is because we went to the store quite late in the day or what but that confused me. I didn’t mind paying the price as I wanted to try them, obviously, but you know? I hate when stuffs confusing! 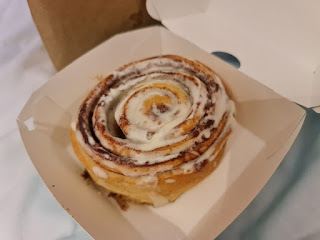 The texture of the buns themselves was quite an unusual one. They were slightly dense rather than soft and light which I was expecting. I guess this allows the filling to hold together inside the bun better and that it doesn’t all fall apart when you take a bite but when all you’ve eaten in your life is soft and light cinnamon buns, it’s a bit of a weird experience. The icing was also thick which is how I like it so I was glad to see that some things still remain the same with Cinnamon buns no matter where you get them from.

The dough tasted just how a cinnamon bun dough should taste. Subtle yet comforting with just a touch of Vanilla. The cinnamon filling itself was to die for. Sweet yet thoroughly spiced. Absolute heaven. I’m glad that these killed it when it came to the amount of a cinnamon in the filling because well not only is that the main point of getting a Cinnamon Bun but also because I adore Cinnamon. The icing complimented the cinnamon beautifully as it cut through all of the spice wonderfully with the Vanilla that is in the frosting. That mixture of Vanilla, Cinnamon and Sugar is sublime and it’s no different in Cinnabon’s Buns.

Would I buy these again? Probably. Before I buy more of the original though, I would definitely want to try the other flavours especially after seeing a Lemon  flavoured one. 8.8:10 overall.

Have you tried Cinnabon? Let me know down below!