Welcome to another DOAML post. I ended up in Lush once again (even though I'm in there most of the time when I'm in Leeds) for the launch of the Tales Of Bath treatment that is available in all of Lush Spa's within the UK.so if you want to have the treatment after reading this post then you can check the Lush website for the nearest spa and get yourself booked in for a wonderful treatment! (Images won't be great but I hope that you don't mind.) 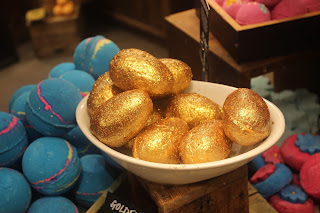 Myself and Luke strolled leisurely to the store and ended up being the first two people there. I would like to say that this surprises me but it seriously doesn't. We waited for a tiny bit and then more and more bloggers waited outside with us. A few moments later, the doors to the store opened and we all made our way into the store. We walked in, got our names checked off on the list, grabbed a drink (there was many choices but I stuck to juice just because it was the night before the deadline for coursework and I didn't want to be drinking until after that deadline) and grabbed an mini apple pie as there were sweet things on offer all throughout the night. 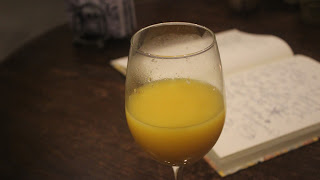 We chatted to Urika who kindly took our things and put them behind the till as I had a massive laptop and two other bags and I didn't think massive bags and picking up products was the best idea. We had a little wander and then was asked to go down to the Spa to find out a little more about the new spa treatment. We went down the wooden spiral stairs and then made our way to one of the treatment rooms where the lovely staff of Lush Leeds Spa told us the story behind the Tales Of Bath treatment. She then went on to tell us about the actual treatment as it contains a shoulder massage, a bath that has epsom salts and other things within and a full body massage which includes a side-lying technique which is amazing for pregnant people or people like me who aren't fully keen on lying face down during massages... Yes, I know that having a bath within a treatment sounds very weird but its Lush and they are very well known for their bath products and their treatments so it's not that surprising that they have entwined them into one via a treatment.  The bath is private so it's not that awkward as you think. 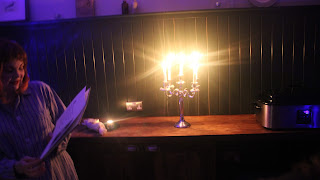 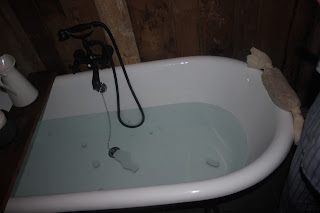 We then went into another room to find out about The Good Hour treatment which includes a full body deep tissue massage which is based on pressure points within your body which I think is pretty amazing. Sea shanties fill the room which makes the experience that bit more relaxing somehow. We then went to check out another treatment and then we were asked if we wanted a demo of The Sound Bath treatment, a Comforter oil massage or a palm reading. Luke chose palm reading and if you want to find out more about that then click here. I chose the Comforter oil massage just as I knew that I would like it as I've had it before and that I could always do with a massage so it felt right to go with that. The oil/serum massage is a part of The Comforter treatment which I want to try at some point as it sounds amazing and I love all things Comforter so... The rose serum is bright pink in colour and is applied to the skin whilst slightly hot so it sinks into the skin quickly. The scent is a slight mixture of rose petals, the comforter and the rose jam scent. You get a bright whiff of rose petals but then if you keep sniffing you get a mixture of cassis from the comforter and a sweet hint of rose jam which blends together for a sweet floral scent. 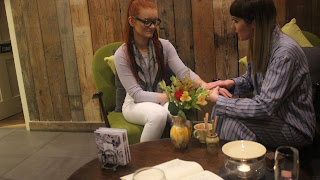 We then headed back up to the shop floor. We had a little bit of a mooch until one of the lovely member of staff called Beth came up and talked to us. Now, as I end up in Lush every time that I'm in Leeds she knew exactly who I was and asked if there was anything that I haven't tried which was a tricky question for myself to answer. I said that I could do with a tiny bit more knowledge about the face masks and hair care. I explained that I normally stick to two face masks which are Catastrophe Cosmetic and Don't Look At Me which I fell in love with whilst in the Oxford Street superstore. She then explained and demoed Cosmetic Warrior on me. This mask has a mixture of tea tree and garlic to cleanse, green grapes which cool the skin and honey and fresh free range eggs which tighten the skin and moisturise at the same time. I fell in love with this one as I loved the colour of the mask and loved what it did. The smell was different as I was a bit indecisive on if a mix of garlic and honey would be the best scent to smother on your face but it worked really well and was quite mild.

We then went over to the hair care section where Beth told us about the shampoo bars. Now, I tried a shampoo bar at Oxford Street and I felt a bit weird after using it so I haven't tried a shampoo bar since then. I just think that the whole trying to get them to lather and then trying to get them to dry puts me off buying them more regular;y. She explained the New shampoo bar to start off with, this one is heavily spiced with things such as Cinnamon and Cloves which stimulate new hair growth hence the name. She explained that if you want your hair to grow then this one would be the best for you. 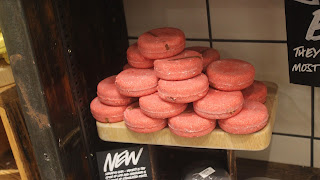 She then went on to Seanik as I explained that I would like moisture with a slight bit of volume as I like to have a slight bit of volume in the back on my hair just so its not all flat/lifeless. This one has seaweed, sea salt and lemon in it to give the hair volume and shine but has a summery scent to it so if you're looking for a shampoo that will make you feel like a marvellous mermaid then this would be the best one for you!

Beth then went on about the Honey I Washed My Hair bar as this one is the best for moisture. It has the scent of Golden Egg/Honey I Washed/It's Raining Men which is a toffee scent but is made up of Orange and Bergamot (I'm not sure how either but I love the scent so I'm not complaining!) Honey is very well known for adding moisture so if you're like me who wants moisture within their hair then this one might be for you! It does have Gold lustre within so if you're not a big fan of lustre then it might not be the best for you? It's up to you really! 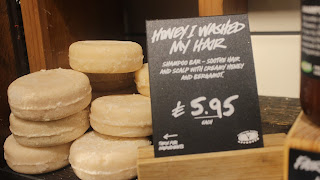 We then had another mooch about and then went to make our own Comforter Bubble Bar's. Yes, I was very excited as I love The Comforter and I love making Lush products. We sat ourselves down and was given a chunk of white and pink. We then had to squish them together and start turning them. Mine decided to crumble very quickly which meant that I had to fiddle with it a little. I then started to try and turn it until it resembled a cone and then squished it which resulted in more crumbling but it looked pretty damn pretty. The lovely staff member decided to give us another one as she had made some in advance just as she guessed that mine would crumble as soon as you tried to get it out of the packet. I forgot to get her name but thank you Lush staff member! They will be used with love as I know that they have been made in front of my eyes! 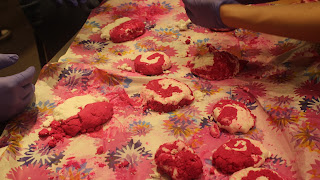 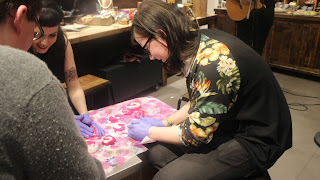 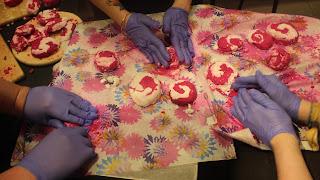 I was deciding if I wanted anything as I felt that it would be best to get stuff then instead of coming back in when the store would probably be busy. I decided that I would not get anything as I already have enough within my lush drawer and that it would be best to replenish nearer the time of when I didn't have so much products to get through! Beth then gave me a sample of Grease Lightning to try as I said that I had heard about Celestial which is a Moisturiser from the wonderful Kellie but as my face is dry and normally in some sort of acne plague so Grease Lightning would be better for myself. 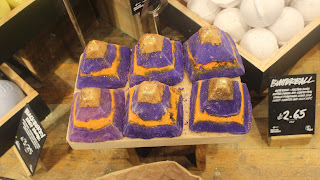 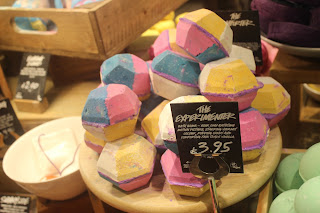 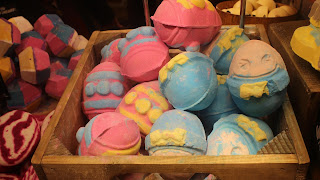 Urika came over for a little bit of a chat. It's always amazing to see Urika. We had a little natter and a selfie and then myself and Luke grabbed our things, got our goodie bags and said bye to all of the staff.

I thought that I would do a little paragraph about the things we got in our goodie bags as I know that you're all nosey people who want to know! We got a Full of Grace facial serum which is basically a massage bar full of Lavender for the face. A Therapy massage bar which contains Lavender, Neroli and Sweet Orange Oil. A Green Bubbleroon which contains Avocado, Lime and Bergamot and Golden Egg Bath Ballistc/Melt as it has the fizz of a ballistic but the melting of oils such as Cocoa Butter and Olive Oil. It smells amazing! To compliment the honey scent, there was also a Honey I Washed My Hair Bar to try in the bag as well!

Have you tried any of the products mentioned in this post? Have you tried out the Tales Of Bath treatment? Let me know in the comments section below! 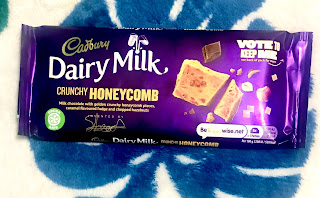