Welcome to a brand new blog post! I recently tried the three new Vegan Doughnuts from Krispy Kreme UK and I thought that I would talk about them to you all today. 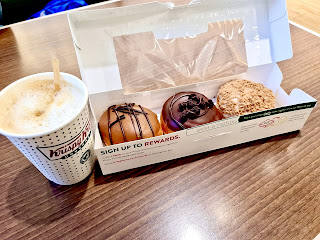 ‘A classic apple and custard vegan filled doughnut which is topped with icing & a cinnamon crumble crumb.’ - Krispy Kreme UK.

So the texture of this doughnut was a bit tough compared to the other two vegan doughnuts which I was a bit unsure about. It seemed soft but sort of stale around the edges? It was a bit weird. The texture of the rest of doughnut was sublime otherwise. The interior was slightly chunky but smooth at the same time due to the mixture of the apple and custard which I adored and the crunchy crumble on the top contrasted beautifully with this instantly making me fall in love with this doughnut!

The taste of this doughnut was delightful! When I took a bite, the first flavour profile that hit my tongue was a sweet vanilla taste from the dough. Once this taste had dissipated, the next flavour that hit my palette was the slightly tart but fresh apple flavour. I love a good tart apple flavour in a sweet dish as this contrasts against all of the sweetness normally and stops the sweet dish (in this case the doughnut) from being sickly. The vanilla from the custard blended into the apple flavour and normally I’m a bit iffy about custard and fruit flavours mixed together but I really loved this one. Once this combination had left my tongue, the last flavour to hit the inside of my mouth was the cinnamon crumble. Now, if you know me well then you will know that I absolutely love cinnamon. The level of cinnamon in this doughnut was quite subdue though which would enable people who aren’t friends of cinnamon to enjoy the doughnut but me being me I would have loved a bit more cinnamon here.

The main flavour that I got from this doughnut was chocolate. I know that this sounds severely obvious but the level of chocolate throughout eating this product was varied which I really liked. The doughnut had a slightly sweeter flavour to it which when contrasted against the slightly more molten dark chocolate filling made for a more three dimensional tasting experience compared to other chocolate baked products that I’ve had before which have ended up being really bland and one dimensional.

Honestly the texture of this was quite one note. It was soft which doughnut: should be but that was about it.

The taste was questionable for me. The first flavour that jumped onto my tongue was the vanilla from the dough and then it all got a little bit confusing.

Even though there was chocolate and caramel in the middle, neither of these flavours jumped onto my tongue. The main flavour that I got from the interior of this doughnuts was pretty much just sugar. I did get a bit more of a chocolate note from the topping of the doughnut but again the one dimensional sugar flavour overwhelmed any other flavour that was in or on this doughnut. Honestly, I’d say try this flavour but In my opinion the two flavours mentioned above were ten times better.

Would I buy them again? The first two definitely. I think I would even get a dozen of just the apple flavour which is rare for me to say. All three are definitely worth a try though! Thank goodness for brands releasing vegan items that my lactose intolerant stomach can handle.