Fixing Broken Bitter Me (AS IT IS Vlog/Review)

Meow so this post is going to be about when I went to go see As It Is (Patty Walters band.) at Leeds Cockpit.

To celebrate finishing college which was one year of hell.. I went to go see As It Is as they were on tour and were coming to a venue within Leeds which is called The Cockpit.

Once I had came home from college, I decided to get everything prepared (including myself) and decided to head to Leeds for the gig that I had waited ages for..

As soon as I got off the train to Leeds, I headed towards the venue and found my friends Amy, Aaron, Natalie, Megan and a few others who were awaiting my presence at the back entrance of the building. I greeted every one of my friends with a friendly hug and then we chatted about things as I had not seen them in a long while.. A few minutes, Patty tried to surprise us by being silent as we were talking then we were going to turn around and be surprised as he was there but it kinda failed. After a while, I went to go hand CV's out.. Once I had done this errand for myself, I went to go get something to eat.. As I had vouchers for McDonald's, I ordered food from the well known franchise as it was cheap for me.. After forcing myself to eat the meal, I found some more friends and met up with the other friends that I was talking to earlier, We wandered around the shopping complex which was a few minutes by walk, chatted about anything and everything, went to a few shops then eventually went back to the venue to queue up and watch several acts perform..

We all entered the venue (I struggled a bit because my eyes and darkness and steps) then I presented my ticket and then waited for the other people that I was with to present their ticket so we could all go and watch together.. I stumbled up some metal grunge inspired stairs and stood with my friends and slowly waited for the anticipation to build up for the gig to start.

The first four acts were all local bands (I knew one was from the college that I studied at). The bands were a mixture of sort of slow soft metal mixed with a bit of folk/indie and the rest were full on metal/rock.. They all played their songs and got the crowd and me riled up for As It Is especially when one band screamed at the crowd for not creating a mosh pit as it was a small room and we were pretty cramped..

As It Is started.. It was fabulous.. Down at the front was the full on mosh pits and in the middle/back was the more spaced out swayers/occasional jumpers.. They played every song perfectly.. The drums were in perfect timing for the song and even though I had heard them before I felt like they were a new fresh band that were awesome live as thats how raw the live performance was. It felt like one of those one in a lifetime performances mixed with a bit of a coyote ugly/open mic moments.. Y'know where its a intimate gig but with a nice decent crowd? They played a range of songs from their latest EP and the lyrics were amazing.. They were kinda deep but in a good way.. They also seemed relevant to me at that moment in time in more than one way. It was all just so amazing in that moment of time. They also meant a lot to me as one of the members is straight edge and the band was influenced on such bands such as New Found Glory which are also straight edge and I am straight edge to a certain extent and it made me feel really proud to see a straight edge influenced band/community to some extent within my own eyes  (*shouts AHMAYZING*)

I met Patty after and I kinda wanted to talk to the band about how great they played and how much they enjoy music as I love music and how it fascinates me but as my eyes were bad and the lighting wasn't great. I just thought that it was just a lot better to get the picture, get something from the merch stand and go without causing a scene or breaking a piece of equipment or something like that.

I said bye to my friends and headed towards the train station and went home and uploaded my clips of that night.. It was so fricking rad! 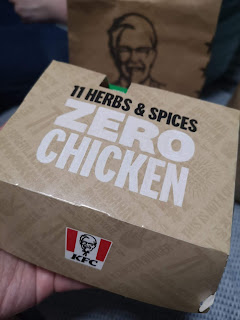