Surfing It Up In Wet Leeds | Limeyard White Rose Event

Welcome to a brand new blog post! I was invited to try out some of the amazing food and drinks at Limeyard at White Rose Shopping Centre last week, and I thought that today, I would talk to you all about it! 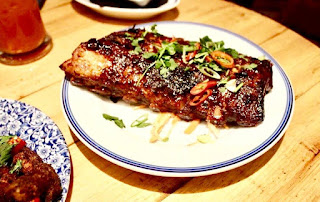 Limeyard, All Day California Kitchen, brings you delicious West Coast-inspired treats for breakfast, lunch and dinner. Serving up their signature delicious dishes including, Coca Cola Glazed Ribs and a Yards of Tacos, just to name a few.! From early morning breakfast to late evening dinners and drinks, you will always find something to cool and breezy at Limeyard. 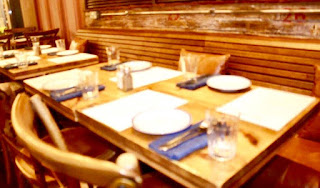 We sat down in a comfy booth in the corner of the restaurant, and chatted for a few moments. We were then allowed to choose two things from a list of the new menu and whatever drink we wanted. As there were four different cocktails, I made it my mission to try all four, because well, I love a good cocktail! The first cocktail of the night was a Koko Mojo. I love saying and typing it for a start... This drink contains Coconut Rum, Lime, Mint, Passion Fruit and Soda. I love anything that starts off with Rum. I loved this slightly more tropical version of a Mojito as the Passion Fruit and Coconut offset the tartness of the Lime. The Passion Fruit just muted the Coconut a bit which is good as sometimes Coconut can make drinks a little bit sickly I could drink these over and over again whilst chatting with friends after some shopping, but also, I could see myself drinking these on a beach! 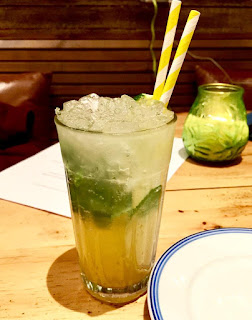 The first dish that we tried was, Mississippi Street Wings. This dish contains House Chicken Wings with Blue Cheese Dip, Coriander and Lime. I rarely eat Wings. I'm not really sure why, but I think its just one of those things that you have to be with good company for, you know? These Wings were delicious. They were succulent on the inside and crisp on the outside. The House Rub that was on the Wings were delicious, but they did come with a kick once you had eaten the wing. I didn't mind this due to the refreshing Koko Mojo. The Lime added a bit of zing against the sweetness of the Chicken and the Coriander added a touch of freshness. 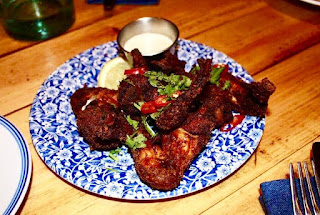 The second drink that I enjoyed was, Frosé. Frosé is well, Frozen Rosé. This drink contains Rosé Wine, vodka, Watermelon, Strawberry and Simple Syrup. I wasn't sure if Wine and Watermelon would work but it kind of did. It gave the drink a refreshing kick! The Strawberry and Simple Syrup took the bitterness away from both the Wine and Vodka, as Vodka is known as that Spirit that no one drinks due to the burning afterwards. I think that this would best during alfresco dining in the middle of a Summers afternoon. 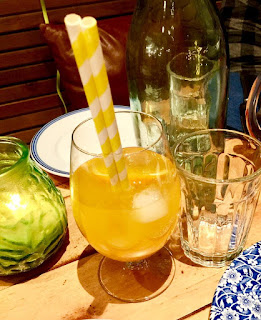 Next on the food truck was, Popcorn Chicken. This dish came with a Chipotle Mayo Dip. The Popcorn Chicken were super crisp and warming on the outside and succulent in the inside. I loved the size of them as you could just pick them up, dip them in the dip, and pop them into your mouth. The Chipotle Mayo Dip was sweet but refreshing,. The coolness against the warm chicken was gorgeous, but the addition of Chipotle was amazing, as I'm not the biggest fan of straight up Mayo. The only problem that I had was that I wanted more! 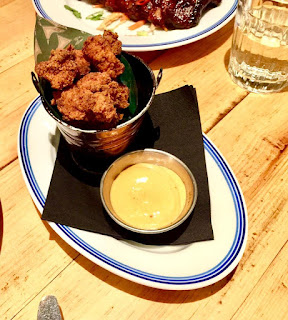 Carrying on with the dishes, the next plate was the delicious 1/2 Yard Of Tacos. These are described as soft Corn Tortillas with a choice of delicious fillings, all served with house Guacamole and Sour Cream. We chose to go for BBQ Pulled Pork, but there is other choices such as, Steak, Spicy Chicken, Crispy Cod and Spiced Black Turtle Beans. The Taco's were delicious. The sweetness of the Corn Tortillas against the smokiness of the BBQ Pulled Pork was gorgeous. The Pork was melt in your mouth which I love and the Guacamole added a splash of coolness and freshness against the deep and warming flavours of the BBQ Pulled Pork These and a Cocktail are good on their own, but they become addictive especially as they just about fit in the mouth all at once. Trust me, I know as I tried it... 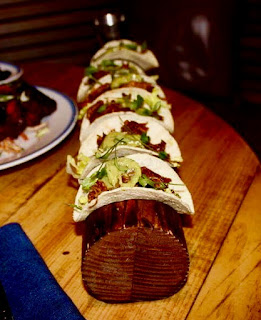 Sadly, the third and final drink was Mango Spritz. This contains Sauvignon Blanc Wine, Vodka, Mango, Pink Grapefruit, House Triple Sec, Simple Syrup and Peach Bitters. The other drink that was on offer during the night was Bay Breeze (this contains Vodka, Coconut Rum, Pineapple and Cranberry), but I didn't finish my Mango Spritz until I finished my food, and it looked a bit weird asking for another drink without any food at the end of the night. I'll have to come back for that last drink! I liked the fruitiness of this as the Mango complimented the Peach Bitters which also cut some of the bitterness out of the Vodka. I'm not massive on Pink Grapefruit but I liked it as it added a bit of zing to the drink. 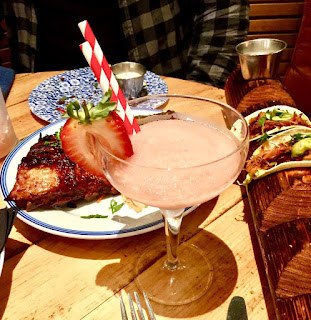 Now to the last dish, which was, Coca Cola Glazed Ribs. First of all, I love Ribs so I instantly knew that I had to try them. I also had to try these due to the fact that they were glazed in Coca Cola, and I wanted to know what that tasted like. These ribs are slow cooked for 8 hours which means that the meat is easy to remove from the bone, for those who hate bones. The meat was succulent and the glaze was sweet but spicy at the same time which I adored. Spice as in that sort of Cinnamon and Clove way, not the Chilli sort of spice. I could eat these for days!

Have you ever tried out Limeyard before? Let me know down below!

Check out Limeyard and White Rose for more amazing food including desserts and for a great shopping experience within Leeds!

Thanks to the PR for invting me to this Blue Monday event, and thanks to the staff on the night for taking care of all of us bloggers that attended.

I hope that you've enjoyed this blog post, and that you come back next time for another blog post!

This blog post was in return of goods and or services. All views, opinions and ramblings are my own!
Posted by jamiesowden at January 26, 2018